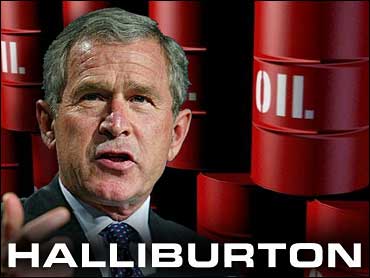 President Bush, trying to calm a political storm, said Friday that Vice President Dick Cheney's former company should repay the government if it overcharged for gasoline delivered in Iraq under a controversial prewar contract.

"If there's an overcharge, like we think there is, we expect that money be repaid," the president told reporters when asked about the Halliburton contract controversy.

Pentagon auditors say the company charged up to $61 million too much for delivering gasoline to Iraqi citizens under a no-bid contract to rebuild Iraq's dilapidated oil industry. Halliburton denies overcharging.

CBS National Security Correspondent David Martin reports since the war began, the Pentagon has paid Halliburton a total of $5 billon on contracts that could eventually total more than $15 billion.

Meanwhile, an Army spokesman disclosed that companies from France, Germany, Russia and Canada won't be eligible to replace Halliburton as the recipient of the oil reconstruction contract.

The Army Corps of Engineers is reviewing bids and hopes to decide this month who will get the oil reconstruction deals worth up to $800 million in northern Iraq and $1.2 billion in the south.

The decision means an additional $2 billion in contracts in Iraq -- not disclosed before — would be forbidden to countries that opposed the war, along with the $18.6 billion in Iraq work the Bush administration declared off limits earlier this week.

The countries that have been left out see the rules as payback, but Bush says limiting contracts to countries that sent troops and money to Iraq makes sense and will encourage more nations to join the U.S.-led coalition.

Democrats have joined the fray, saying Bush is needlessly alienating allies and rewarding political supporters. Cheney headed Halliburton from 1995 until he became Bush's running mate in 2000, and other executives from the company gave generously to the Bush campaign.

"George W. Bush is preventing entire nations from bidding on contracts in Iraq so his campaign contributors can continue to overcharge the American taxpayers," Democratic presidential candidate Howard Dean said while campaigning in Iowa Friday.

The political impact is still unclear. As long ago as last May, in a CBS-New York Times poll, about half the respondents said they thought the Bush administration gave contracts to companies because they had close GOP ties.

Pentagon officials say they gave Halliburton the prewar oil reconstruction contract because it was essential to start rebuilding quickly after the U.S.-led invasion. Halliburton already had the competitively bid contract to provide short-notice logistical help for the Army.

Separately under that contract, Halliburton has been paid about $3 billion for supporting the military with cafeterias, mail delivery and other services.

The oil contract, which started as a relatively small order for fighting oil well fires, has grown into the largest reconstruction contract in Iraq. Halliburton has gotten more than $2.2 billion so far on that contract — $989 million from U.S. taxpayers, $1.3 billion from the United Nations' oil for food program and $90 million from seized Iraqi assets.

Together, the 11 other Iraq reconstruction projects awarded to other companies have paid out $1.7 billion. The largest, to construction giant Bethel for rebuilding infrastructure such as highways and bridges, has delivered more than $1 billion so far.

The largest part of Halliburton's oil reconstruction contract is providing gasoline and other fuel to Iraqis while the country's oil industry is rebuilt. A Pentagon audit found Halliburton was charging $1.09 more per gallon for gasoline it trucked into Iraq from Kuwait than for the same fuel it imported from Turkey.

Pentagon officials said Thursday Halliburton's Kuwaiti subcontractor apparently charged too much for the gasoline. Halliburton's president, Dave Lesar, said the Kuwaiti firm was the only one that met the contract's requirements. Lesar said Halliburton earned "a few cents on the dollar" for delivering the fuel.

Under the contract, Halliburton gets a guaranteed profit calculated as part of the company's costs. In other words, the higher the costs, the more money Halliburton gets.

Halliburton is guaranteed a profit equal to at least two percent of its costs. Depending on performance, Halliburton can earn a profit of up to 7 percent of costs.

If the subcontractor did overcharge by $61 million, Halliburton would be guaranteed $1.2 million in profit from that amount. If Halliburton earned the entire 7 percent, its profit on the overcharge would be about $4.3 million.

The Army Corps of Engineers currently is reviewing bids for the $2 billion in contracts that will replace Halliburton's no-bid award. At least 69 companies — including Halliburton — were sent solicitations, according to a Corps Web site.

Those companies included ones based in Canada, India, Great Britain, Jordan, Kuwait, Oman and Saudi Arabia. Bids from Canadian and Indian companies would be barred under the Bush administration's restrictions.