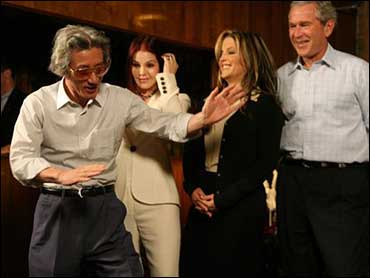 All it took was a simple invitation from Mr. Bush.

"You're a pretty good Elvis singer," the president said, in an obvious prompt to his guest. Mr. Bush knew what was coming, having previously experienced Koizumi's tendency to burst into song when it comes to the late rock 'n' roll legend who is the Japanese leader's undisputed musical hero.

Koizumi is a member of the Elvis Fan Club in Japan – the biggest in Asia and arguably the most outrageous in the world, reports CBS News correspondent Sharyn Alfonsi.

Enter the special tour guides for the two leaders' private tour of Graceland: Presley's only child and heir, Lisa Marie, and her mother, Priscilla. "I want you, I love you," remarked Koizumi, spouting more Elvis tunes. Draping his arm around Lisa Marie, he went on. "Hold me close, hold me tight," the prime minister crooned.

It was the kind of Friday Graceland hasn't seen.

The Bush-Koizumi tour through the Memphis manse wrapped up two days of consultations between the staunch allies. Koizumi's visit saw military pomp, the tinkling of crystal at a black-tie dinner and two hours of discussions on Iraq, North Korea, U.S. beef exports and other weighty matters in the Oval Office.

But their outing to Graceland, with its oddity quotient and celebrity patina, was the most-anticipated portion.

Swiveling hips, spangled jumpsuits and over-the-top decor aren't Mr. Bush's usual style. And this is a president who routinely skips even the most awe-inspiring destinations on his speed-travels — such as India's Taj Mahal.

So it's a sign of his fondness for the Japanese leader that Mr. Bush took Koizumi to a tourist hotspot, and by plane, no less, five years to the day after they first met. Aides said the president decided a Graceland tour was the perfect way, along with a gift of a jukebox loaded with Elvis hits, to bid adieu to a leader who is departing office in September after being one of his most ardent defenders on the world stage.

"It is such a joy to be here at Graceland," Mr. Bush said during the middle of their tour of the white-columned, two-story colonial recently designated a National Historic Landmark. "The visit here is an indication of how well-known Elvis was around the world.The visit is also a way of reminding us of the close friendship of our people."

Mr. Bush had revealed his excitement about the day's travels as he drew the formal dinner he threw for Koizumi at the White House to a close at 10:10 p.m. Thursday night. "Off to Graceland," the president said.

On Friday, things got campy right off.

CBS News White House correspondent Peter Maer reports the Elvis theme started aboard Air Force One where "Love Me Tender" and "Don't Be Cruel" could be heard on the p.a. system.

DVDs of Elvis movies were available for viewing and stewards brought out that Elvis culinary favorite — grilled peanut butter and banana sandwiches, each with 36 grams of fat. The two leaders passed on the sandwiches. Mr. Bush drank coffee and Koizumi drank green tea.

"I'm feeling a little heavy," groaned White House chief of staff Joshua Bolten, one of the few presidential aides who braved the breakfast treat. "I so rarely fry my peanut butter sandwiches."

White House press secretary Tony Snow — wearing gold-rimmed plastic sunglasses — did his best, meanwhile, to fuel lingering conspiracy theories that the singer never died, saying that Mr. Bush and Koizumi were likely to go to Elvis' "alleged grave site." In fact, Graceland spokesman David Beckwith said the "meditation garden" near the swimming pool where Elvis is buried was the chosen place for the two allies to have some "private time."

The pair saw what most visitors see: the Jungle Room, famously furnished with a 30-minute shopping spree, and the glossy black baby-grand piano near the living room's white, 15-foot sofa, and hundreds of gold records, outfits and guitars in the home's museums.

Also like others, they weren't allowed a peek at the private upstairs quarters, including the bedroom and bath where Elvis died in 1977.

Bill Clinton, for example, always felt a certain kinship to Presley, as both were sons of the South who rose from very humble beginnings.

One president even claimed to have been a relative of Elvis.

Mr. Carter said that when Elvis would come to Atlanta, "We would visit with him (and) obviously attend his concerts."

But no president had a stranger Elvis experience than Richard Nixon.

In 1970, Elvis showed up at the Nixon White House without an appointment, but told the guards at the gate he wanted to see the president. And he got his wish. Wearing tight velvet pants, a dark purple cape and a white silky shirt open to below his chest, Elvis asked Mr. Nixon to make him a federal narcotics agent.