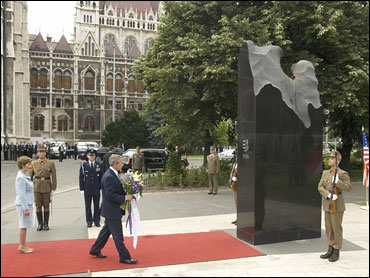 President Bush on Thursday acknowledged the world's impatience with Iraq's turbulent transition to democracy, but said Hungary's decades-long struggle to break the grip of Soviet oppression underscores the power of freedom.

"The lesson of the Hungarian experience is clear," Mr. Bush said in the courtyard of Buda Castle where he celebrated the coming 50th anniversary of Hungary's bloody revolt against communist rule. "Liberty can be delayed, but it cannot be denied," the president said.

Mr. Bush noted that Hungarian soldiers are helping to train Iraqi security forces, and are assisting in Afghanistan as well.

"This is important work," he said. "By supporting these two young democracies, you are strengthening two new allies in the war on terror and you are bringing hope to millions of people in a vital region of the world."

Mr. Bush headed back to the U.S. after his visit to Hungary, the final stop on a short European swing. He was due in Washington Thursday evening.

Earlier, Hungarian President Laszlo Solyom also paid tribute to his country's difficult emergence from behind the Iron Curtain, yet he gently nudged Mr. Bush to make sure that the U.S.-led fight against terrorism doesn't stomp on human rights.

"This fight against terrorism can be successful only if every step and measure taken are in line with international law," Solyom told the U.S. leader in a gilded room at the Sandor Palace.

Mr. Bush's commemoration of the 1956 uprising was more than four months early.

Communists seized control of the Hungarian government in the late 1940s. In 1956, the Hungarian people revolted against the communist oppression, but Soviet troops crushed the revolution. Pro-Soviet forces fired on a crowd of 100,000 peaceful protesters and killed more than 500. The following month, armored Soviet divisions rolled into Budapest, brutally crushing the revolt and leaving thousands dead in the fighting.

Over the next three decades, the anti-communist movement steadily demanded greater freedom. In 1989, the Hungarian Communist Party ended its 40-year rule of Hungary, paving the way for multiparty elections.

"We've learned from your experience and we resolve that when people stand up for their freedom, America will stand with them," Mr. Bush said.

His administration is pursuing a more multinational approach to diplomacy, but widespread anti-Bush sentiment remains in Europe. It is driven by ongoing perception of a go-it-alone U.S. foreign policy represented most starkly by the U.S.-led invasion of Iraq.

"Sometimes we might have debates, we might have discussions," Hungarian Prime Minister Ferenc Gyurcsany said during a luncheon toast at the Parliament. "But after all, we know that we must work together and fight together for the objectives that we have together."

Mr. Bush spoke on a stage set against a wall of Buda Castle, with a panoramic view of Budapest, the twisting Danube River and the hills beyond. It was muggy and hot, with dark rain clouds threatening overhead and thunder occasionally punctuated his remarks to an audience of about 200.

Mr. Bush's first stop in Budapest was the hilltop palace where he met with Solyom. In a cobblestone side courtyard overlooking the picturesque city, soldiers in tan dress uniforms with red accents stood at attention and a military band flanked by troops on horseback played both countries' national anthems.

Afterward, at the enormous Gothic-style Parliament building along the Danube River, Mr. Bush and Gyurcsany said that one of the only sticky issues that came up in their talks is the desire by several Eastern European nations to be included in the U.S. visa waiver program — a move that would allow their citizens to visit America for three months without a visa.

"I understand this is a difficult issue, and we have developed a road map so we can work through this issue," Mr. Bush said.

In the most somber moment of this trip, Mr. Bush laid a wreath, a small spray of bright colored flowers at the Budapest memorial to the victims of the 1956 uprising, CBS News correspondent Peter Maer reports.

The president bowed his head momentarily, then as a Hungarian bugler sounded mournful notes, he and the first lady stood on a red carpet in front of the stark black stone monument to the tens of thousands of Hungarians killed in the revolt when Soviet troops and tanks broke the attempted revolution.

Mr. Bush's next trip to Europe will be to the Group of Eight summit in St. Petersburg, Russia.