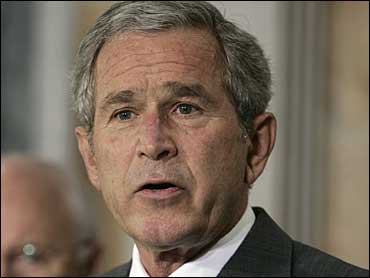 President Bush was treated for Lyme disease last August, the White House announced Wednesday after failing to disclose the problem for nearly a year.

The treatment was revealed only when the White House on Wednesday made public all the results of Bush's annual physical exam. The disease showed up in the "past medical history" section and in the summary along with other skin conditions.

Bush was treated for what his doctors described as "early, localized Lyme disease" last August after developing the characteristic bullseye rash. The doctors said he has had no recurrence.

White House spokesman Scott Stanzel said the disease was not disclosed earlier because it happened after he had his last physical, on Aug. 1, 2006.

"It was a rash," he said. "It's not uncommon for the president to have tick bites when he's out biking."

Lyme disease is a tick-borne infection that, if left untreated, can cause arthritis and other problems. Symptoms include cognitive impairment, lethargy, joint pain, severe headaches, fever, limping, loss of appetite and fatigue. A bacterial disease, it can be eradicated with antibiotic treatment in early stages but can recur in some patients.

The president's main form of exercise and recreational activity is biking. His doctors advised him to wear long pants and long-sleeved shirts and use bug spray when in risk-prone areas, such as Maine, where the president is spending a long weekend starting Thursday at his parents' summer home on the coast.

Last year's presidential physical was conducted as usual on a visit to the National Naval Medical Center in suburban Maryland. This year's took place in a series of exams at the White House starting July 17 and ending Tuesday night. The exams were not revealed until Wednesday. Doctors pronounced the 61-year-old president healthy overall.

"Doctors have determined that the president remains in superior fitness for a man his age — anybody who's seen him on the bike or out and about certainly knows that — and that he is fit for duty," press secretary Tony Snow said.

As part of the physical, Bush had a colonoscopy last month at his Camp David, Md., mountaintop retreat. Five small growths were removed from his colon but doctors determined that none of them was cancerous.

A total of 11 doctors were involved in the exams, overseen by White House physician Richard Tubb and Dr. Kenneth Cooper, the president of The Cooper Aerobics Center in Dallas. The group included skin, hearing, heart, eye, neurological and sports medicine specialists.

Each signed a statement saying that "within the scope of my specialty" he found Bush "fit for duty" with the expectation that he will remain so for the duration of his presidency — standard language used after presidential physicals.

A four-page medical summary that accompanied the brief doctors' statements said Bush remains in the "superior" fitness category for a man of his age, in the 97th percentile, thanks in part to a six-day-a-week exercise regimen.

Doctors made Bush run on a treadmill for more than 25 minutes as part of a test that evaluates the performance of his heart. His heart beat reached 184 beats per minute; no signs or symptoms of cardiovascular problems were noted.

Other information from Bush's checkup included:

The president has skin lesions consistent with sun damage, though none was treated.

Bush suffers from seasonal allergies that are controlled.

He is recovering from a sinus infection that caused fluid to build up in his ear, pain in his cheekbones and mild dizziness.

The president has had no recurrence of occasional bouts with reflux of stomach acid, and his mild high frequency hearing loss didn't get worse.

Bush smokes a cigar now and then, drinks coffee and diet sodas and takes a daily multivitamin but does not routinely take any prescription medication.

Iran believed to be responsible for attack on U.S. base in Syria