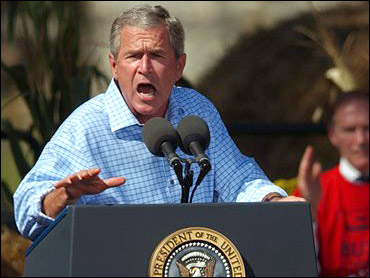 President Bush ripped into John Kerry on Iraq Friday, taking a more aggressive approach than he had in the previous night's debate as both candidates rushed back to the campaign trail to put their own spin on the first big face-off.

The president said Kerry has a "fundamental misunderstanding of the war on terror" and no plan by which to win the war in Iraq. He accused Kerry of withholding support for American troops and offering to turn over decisions about the nation's security to other countries.

"The use of troops to defend America must never be subject to a veto from countries like France," Mr. Bush told supporters at a rally in Allentown, Pa.

For his part, Kerry made light of the president's debate performance, telling supporters in Tampa, Fla., that Mr. Bush's assertions that opponents of his policies want to leave Iraq are not accurate.

The Democrat was buoyed by three post-debate polls suggesting voters who watched the policy-driven confrontation thought he had won.

The senator's campaign prepared a TV ad that featured newspaper headlines from Friday praising his performance, and the Democratic National Committee rolled out a Web video showing clips of Mr. Bush appearing frustrated at the debate.

Mr. Bush was introduced at the Pennsylvania rally by Sen. John McCain, R-Ariz., who earlier in the day had said that the debate had been Kerry's "brightest moment" in the last six weeks. McCain said here that Mr. Bush "has the strength, he has the courage. He has not wavered."

Determined to rebound, Mr. Bush said Kerry voted to use military force in Iraq but then voted against the administration's request for $87 billion for Iraq and Afghanistan. "The president cannot keep changing his mind,'' he said, thumping his finger on the lectern. "The president must speak clearly. And the president must mean what he says."

Noting that Kerry had said he would bring allies together to find a solution for Iraq, Mr. Bush said he had been to many summits. "I've never seen a meeting that would depose a tyrant or bring a terrorist to justice," he said. "I will never submit America's security to an international test."

In the debate, Kerry said he supported the right of a president to order a pre-emptive strike to protect the country but said it must pass "the global test where your countrymen, your people understand fully why you're doing what you're doing, and you can prove to the world that you did it for legitimate reasons."

Mr. Bush also contended that Kerry had once supported removing Saddam Hussein from power but now ``says it was all a mistake.''

"You can't have it both ways,'' the president said. "You can't be for getting rid of Saddam Hussein when things look good and against it when times are hard."

Sen. John Edwards
, said Friday that he told Kerry after the debate, "I think people saw the next commander in chief." He criticized Mr. Bush for failing to acknowledge problems in Iraq, and applauded his running mate for laying out a clear strategy.

"Our military has done everything they've been asked to do, but because of the failures of this president, Iraq is a mess right now and getting worse," he said in an interview on CBS News'The Early Show. "The president never acknowledged last night the severity of the problem," he said.

Dan Bartlett
said
Mr. Bush believed he had effectively spelled out the strategy and shown the resolve to win the war on terror.

"He felt it was a clear opportunity for him to discuss two very different visions for fighting this war on terror," Bartlett told Early Show Co-Anchor Harry Smith.

"I think it's critically important that the American people understand that the first part of a mission is to believe in a mission, and I think Senator Kerry sent very mixed signals in that regard," he said.

CBS News talked to uncommitted voters immediately after the debate, and found 43 percent said Kerry won the debate compared to 28 percent who went with the president.

But in even better news for Kerry, CBS News Correspondent Bill Plante reports his likeability scores rose dramatically, putting him essentially even with the president and ahead among women.

In Thursday night's encounter at the University of Miami, both men drew heavily on oft-repeated lines from their campaign speeches but they faced each other directly across the same stage for the first time.

Mr. Bush criticized Kerry for saying Iraq was the wrong war at the wrong time in the wrong place. "What message does that send to our troops?" the president said. "Not a message a commander in chief gives."

Repeating a line he has used countless times to show his opponent is inconsistent, the president tweaked Kerry for saying he voted for an $87 billion spending bill for Iraq and Afghanistan before he voted against it.

When Kerry leveled some of his charges, Mr. Bush appeared irritated and scowled at times and, at other moments, glanced away in apparent disgust. Kerry often took notes when the president spoke. The television networks offered a split screen to viewers so they could see both men at the same time and watch their reactions.

Mr. Bush knew he would be on camera during the entire debate and was aware that the networks had not agreed to show only the candidate who was speaking, Bush campaign spokeswoman Nicolle Devenish said. Regarding Mr. Bush's facial reactions, Devenish said: "The president reacted honestly. It showed the president really believes in his convictions."