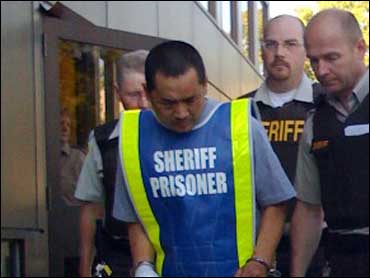 A man accused of beheading and cannibalizing a fellow passenger on a Greyhound bus in Canada apologized to police when he was arrested and begged officers to kill him. The details emerged Tuesday as Vince Li pleaded not guilty at the start of his murder trial.

"I'm sorry. I'm guilty. Please kill me," Li said, according to an agreed statement of facts read in court.

The Chinese immigrant is accused of the second-degree murder last summer of Tim McLean, a 22-year-old carnival worker who was killed in what passengers described as a random, horrific attack.

Li's lawyers are not disputing that he killed McLean, but they will argue Li was mentally ill and not criminally responsible.

Three dozen passengers were aboard the bus as it traveled at night along a desolate stretch of the Trans-Canada Highway in western Canada. Witnesses said Li attacked McLean unprovoked, stabbing him dozens of times.

As horrified passengers fled the bus, Li severed McLean's head and displayed it to some of the passengers outside, witnesses said.

A police report said an officer at the scene saw the attacker hacking off pieces of the body and eating them.

The statement of facts read in court said Li attacked Tim McLean "for no apparent reason" and McLean fought to escape before he died.

The statement said Li tried numerous times to leave the bus, but he was locked inside, and he returned to McLean's body and cut it up further. Li eventually escaped through a window and was arrested.

Police said McLean's body parts were found throughout the bus in plastic bags, although part of his heart and both eyes were never found. The victim's ear, nose and tongue were found in Li's pocket. 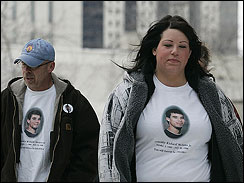 (AP Photo)
McLean's family and friends, many wearing T-shirts with his picture, wept as the details were read. The victim's mother, Carol deDelley, said she wants the law changed so anyone found not criminally responsible for a crime still serves prison time.

Li, who came to Canada in 2001, pleaded at an earlier hearing in August for someone to "please kill me."

Canada does not have the death penalty.

A court-ordered psychiatric evaluation had declared him fit to stand trial.

Before he left on the bus trip, he left his wife a note: "I'm gone. Don't look for me. I wish you were happy."