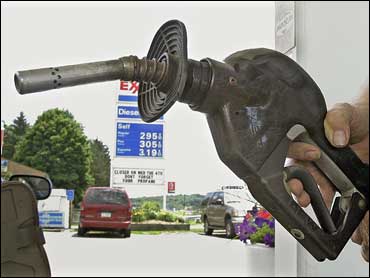 When Michael Cohen pulls up to the Deluxe Town Diner outside Boston, more often than not he has the locally legendary French fries on his mind.

Not the potatoes; the oil they're fried in, CBS News correspondent Richard Schlesinger reports.

He can't get enough of it. With no transfat, it has transformed the way Cohen feeds ... his car.

Does he ever go to the real gas station?

"I bought some fuel for my lawn mower at the beginning of the summer," Cohen said.

"I had a lot of trepidation when I first poured that first tank of vegetable oil in there," Cohen said.

It not only works, it's as good as regular diesel fuel: same mileage, but not the same price.

He gets the oil for free, and spends just pennies to process it.

"When was the last time you paid twenty five cents a gallon for gas?" Schlesinger asked.

"I think my grandfather probably did that!" Cohen said.

He has his own little refinery - a filter in his garage to get out the pieces of whatever was cooking to purify the oil.

Cohen gets his oil mostly from diners, but he'll take it anywhere he can get it.

Schlesinger asked him where he got the oil he's currently driving on.

"I got it from a friend who fried a turkey for Thanksgiving," Cohen said.

Any car with a diesel engine can be converted to run on vegetable oil. Driving a converted car feels like driving a car that uses regular fuel, except it smells a little like French-fries.

But that's better than smelling like diesel fuel - and it's much better for the environment, producing almost zero harmful emissions.

It's a new way to look at frying food. What's bad for your girth is good for the Earth.