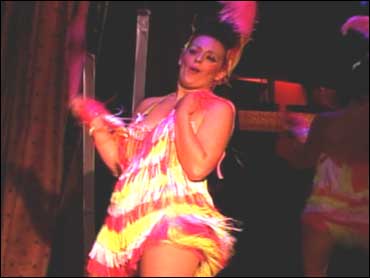 They call it Neo-Burlesque...

Not for the tame at heart, these provocative performers know how to captivate their viewers. On any given night, a member of the audience should not be surprised to see visuals which would make the likes of Howard Stern blush. In fact, attending such shows serves as an example of where an open mind is definitely a requisite.

Once a popular, and highly provocative, pasttime during the early and middle part of the 20th century in the United States, a new generation has now reinvigorated this growing revival movement.

With a strong and devoted base in New York City, various acts promise to deliver mesmerizing, and tantalizing, performances which local audiences are sure not to forget anytime soon.

Some may call it weird, others will say it's just down right perverted. But, that has not halted an ardent cult following from emerging. Locals and tourists alike frequently throng to these venues, many of which are located in Manhattan's Lower East Side. With growing popularity, these artists are sure to stay in business. Musician and entertainer Viva DeConcini, often referred to simply as Viva, certainly thinks so.

"There's this idea of burlesque which is ... something's going to happen. It might be sexy and you might see something you wouldn't ordinarily see," Viva said in a recent interview for CBSNews.com.

A stand-out in the music scene as a result of her legendary rock guitar performances, Viva regularly hosts burlesque acts in New York, where she serves as an MC of sorts for the weird and the wild.

Viva, who is getting ready to release her second album, "Rock and Roll Lover," now hopes that the neo-burlesque trend will reach even further outlets.

"It's fun to work with these burlesque performers, they do the make-up and they do the glam. They present this other-wordly element too..people seem to like it. It seems to be pretty popular."

The artist also points out that these types of variety acts in deed serve as a legitimate art form. These performers are not just style, as substance still remains vital. Shock value aside, many of these performers are accomplished jazz and rock musicians, acrobats, comics, dancers, and noted singers. The spirit of Vaudeville still thrives here.

Now, with gaining momentum, only time will tell if the mainstream culture will accept such...unique talents. But one thing is for certain, these are definitely shows where you would want to leave the kids at home.

Hear more of Viva's music when her new album, "Rock and Roll Lover" is released on July 13th.

Find out more about burlesque acts and Viva's music at myspace.com/vivadeconcini and www.electricviva.com