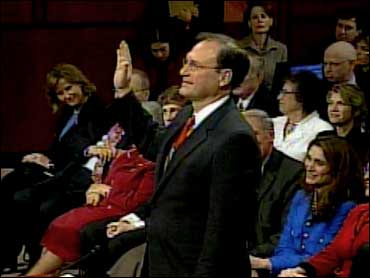 The Raptors played the game with just nine players, including only two of the six acquired in trades in the past week.

Chicago took advantage of Toronto's depleted lineup to build a 27-point lead after three quarters. The huge lead allowed the Bulls to keep all five starters on the bench for the entire fourth quarter.

All 11 Bulls played at least 10 minutes as Chicago outrebounded the Raptors 60-35, including 29-14 in the first half.

The Bulls got off to a quick start, building a nine-point lead in the first six minutes on the strength of three 3-pointers by Pippen.

The Raptors trailed 31-26 after the first quarter and were down 55-44 at halftime. Toronto had tied it at 40 with three minutes to go in the second quarter, but Chicago went on a 15-4 run to close out the half.

Notes: Toronto newcomers Gary Trent (groin), Alvin Williams (knee), John Thomas (leg) and Chauncey Billups (due to report Friday) all missed the game. Williams is expected to miss two weeks, while the other two injuries are day-to-day. ... Chicago made a deal before the 6 p.m. EST trading deadline, sending forward Jason Caffey to Golden State for forward-center David Vaughn and two draft picks. ... Raptors guard Chris Garner was put on the injured list before the game with tendinitis in his right ankle. ... The game was played before a season-high crowd of 30,172.