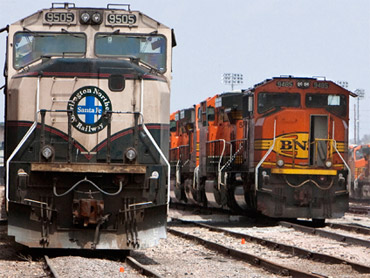 Burlington Northern, the second-largest U.S. railroad, is the biggest hauler of food products like corn and coal for electricity, making it an indicator of the country's economic health. The railroad also ships a large amount of goods from Western ports including everyday items such as refrigerators, clothing and TVs.

Analysts say Buffett is planting both feet in an industry that is poised to grow as the economy gets back on solid ground. If approved, it would be the biggest acquisition ever for Berkshire Hathaway Inc.

Berkshire Hathaway already owns about 22 percent of Burlington Northern, and said it will pay $100 a share in cash and stock for the rest of the company, a 31.5 percent premium on Burlington Northern's Monday closing price. Shareholders have the option to convert their stock for a cash payment of $100 per share or receive Berkshire Class A or Class B common stock. Up to 60 percent of the deal is cash and 40 percent is in stock.

(Mario Tama/Getty Images)
"Berkshire's $34 billion investment in BNSF is a huge bet on that company, CEO Matt Rose and his team, and the railroad industry," Buffett, seen at left, said in a statement.

"Most important of all, however, it's an all-in wager on the economic future of the United States. I love these bets," he said.

BNSF has 32,000 miles of rails, an average of 220,000 freight cars on the system and hauls enough grain to provide 900 million people with a year's supply of bread, according to the company. One out of 11 cars or trucks ride the BNSF rails, and the system hauls enough lube oil to fill 1.6 billion quarts. BNSF also touts its fuel efficiency -- moving one ton of freight 423 miles on a gallon of diesel fuel.

The majority of the stock in the deal will be Berkshire's "A" shares, but Berkshire's board also approved a 50-for-1 split of its Class B common stock for holders of smaller amounts of Burlington shares who opt for a share exchange rather than cash. Berkshire's Class B shares closed Monday at $3,265. With the split, each share will be worth $65.30. Burlington shares shot up $21.33, or 28 percent to $97.40 in morning trading. Shares of other major rails, including Burlington's larger rival Union Pacific Corp., rose as well.

The deal for Burlington Northern has been approved by the boards of both companies, but still needs two-thirds approval of Burlington's shareholders and antitrust clearance. The railroad expects to clear those hurdles in the first three months of next year.

Last week the railroad reported third-quarter profit dropped 30 percent to $488 million, or $1.42 per share, as consumers continued to hold back on buying retail goods and industrial production struggled.

Burlington was one of the least optimistic among major railroads about the pace of economic recovery. CEO Matt Rose said consumers are going to be the driver of any improvement in the economy, but no one is buying yet.

Analysts say Buffett is looking for an investment that will reap rewards for many years into the future, and isn't so concerned about immediate gains.

"(Buffett is) buying at the trough - things aren't going to get much worse. He's getting in at a good time," said Art Hatfield, an analyst with investment firm Morgan Keegan.

Hatfield said he believes Buffett went for Burlington Northern in part because of its good management team, an important aspect in any of the billionaire's deals.

Hatfield also said that Burlington Northern has been more progressive than its peers in developing new technology, allowing to be more profitable. Major railroads have been able to slash costs during the recession by cutting jobs, parking railcars and making strides to improve train speeds and other metrics that improved efficiency.