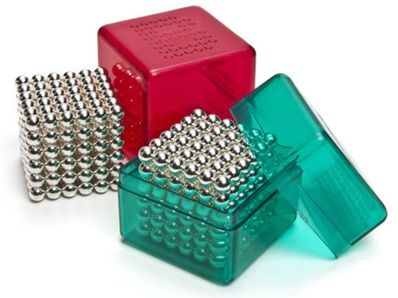 (CBS News) The company behind Buckyballs is claiming that the federal government unfairly targeted it's business when the Consumer Product Safety Commission issued a complaint to stop sales of the magnetic product.

"Obviously the bureaucrats see danger everywhere, and those responsible people - like our company who have vigorously promoted safety and appropriate use of our products - gets put out of business by an unfair and arbitrary process," Craig Zucker, Founder and CEO of Maxfield and Oberton, which manufactures Buckyballs and Buckycubes, said in a statement. "I don't understand how and why they did this without following their own rules before allowing us to make our case. It almost seems like they simply wanted to put our products and industry out of business."

The CPSC, a federal agency, filed a complaint yesterday against the magnetic adult desk products because of their potential health hazards for children. The consumer watchdog group asked for retailers to stop selling the high-powered rare earth magnets because of the risks posed to individuals that swallow the balls. Already, Amazon, Brookstone and Urban Outfitters have complied.

Currently marketed to adults, the CPSC reported that more than 2 million Buckyballs have been sold in the U.S., as well as 200,000 Buckycubes. Each container has anywhere from between 10 to 216 small magnets.

Problems arose when children began swallowing the tiny balls and using them to mimic cheek or tongue piercings, leading to accidental swallowing. When the magnets are consumed, they can pinch or trap the intestinal walls, leading to inflammation, ulceration or ripping of the intestines. More serious side effects include infection, sepsis and death. Since the outward symptoms mimic the flu, caregivers may delay getting treatment because they think it is a less serious problem.

CPSC spokesperson Alex Filip told CBSNews.com that there were 22 cases of swallowing these magnets from 2009 to October 2011. One of the most high-profile cases was that of a 3-year-old from Portland, Ore., who swallowed 37 magnets. The girl needed surgery after the balls ripped three holes through her intestines.

The American Academy of Pediatrics (AAP)said in a statement that they agreed with the CSPS complaint, adding that the minute size of the magnets made it hard for caregivers to see if one is missing. A survey of North American Society for Pediatric Gastroenterology, Hepatology, and Nutrition members found that there have been more than 60 magnet ingestion cases over the last two years, which necessitated 26 surgeries and involved 23 bowel perforations. It wasn't stated how many of these cases were related to Buckyball or Buckycube magnets.

"As pediatricians, our number one goal is to keep children safe," AAP President Dr. Robert W. Block said. "The powerful, tiny magnets contained in these toys and other similar products have caused unnecessary surgeries, debilitating injuries, irreversible gastrointestinal damage and other lifelong health impacts in infants, children and adolescents."

Maxfield and Oberton pointed out that they made an educational video detailing the dangers of swallowing Buckyballs and Buckycubes in compliance with the CPSC's requests nine months ago. They claimed that the CPSC's action against their $50 million company "unfair, unjust and un-American," especially since there have been less than two dozen misuse cases. While balloons - which were previously determined to be a health hazard by the CPSC - are allowed to be sold as long as they come with an advisory saying "adult supervision required," their product, which has five clearly labeled warnings on its box, is being taken off the shelves, they argued.

"As a small business owner I'm left wondering what to tell my employees and their families. How can this happen in America?" Zucker said.