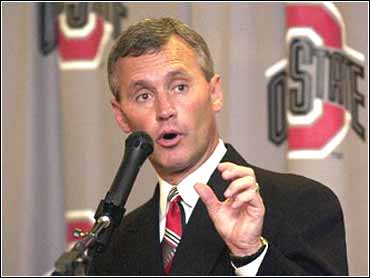 Well aware of the legacy he inherits, Jim Tressel is making the jump from the obscurity of Division I-AA Youngstown State to the spotlight of Ohio State.

Tressel took over as the Buckeyes' coach Thursday with a five-year, $4.6 million deal and a mandate to build players' character, bolster classroom performance and, of course, beat Michigan.

"Having been born in the state of Ohio and idolizing the likes of Paul Brown and Woody Hayes ... as I sit here and think about the fact that I will be following men like that, it's really humbling, and it's so exciting," Tressel said.

Tressel, who won a record four Division I-AA national championships in 15 years at nearby Youngstown State, was picked to succeed John Cooper as coach after a 16-day search.

"Had we not won those four championships, I would not be here," Tressel said.

Ohio State President William Kirwan said the university wanted a coach with a good record of graduating players, who reflected the values of the university and wanted success on the field but not at the expense of academics.

"Excellence is what is expected," said Tressel, an assistant coach for the Buckeyes before leaving for Youngstown State.

He has never led a Division I-A program.

"I measure the man and not the level," athletic director Andy Geiger said. "I don't think the game's that much different in concept."

The Buckeyes also will be without two of last season's top four rushers, four of the top five receivers, plus two of the top three tacklers and the two leaders in interceptions.

The Berea, Ohio, native handled quarterbacks and receivers at Ohio State under Earl Bruce, from 1983-86. He also served as an assistant coach at Akron, Miami of Ohio and Syracuse.

Cooper was fired after Ohio State lost 247 to South Carolina in the Outback Bowl. But Geiger also cited poor academic performance, on-the-field taunting and off-the-field run-ins with the law by Buckeyes players.

Tressel, known for disciplined Youngstown State teams, gave his new bosses another indication of his attitude toward academics.

After introducing his mother and other family members, Tressel noted his son Zak was not present because he had a physics class at Ohio State. Tressel said he had learned from his late father, Dr. Lee Tressel, that the only excuse for skipping class was "a death in the family - your own family."

The elder Tressel compiled a 155-52-6 record as coach at Baldwin-Wallace College. Tressel lettered four years as a quarterback for his father.

His Youngstown State contract, which was to run out in June, gave him a base salary of $88,500 and a $20,000 annual stipend to also serve as athletics director.

But he was 3-8 in those bowl games and was just 2-10-1 against Ohio State's chief rival, Michigan - a game that Ohio State fans refer to as "The Game."