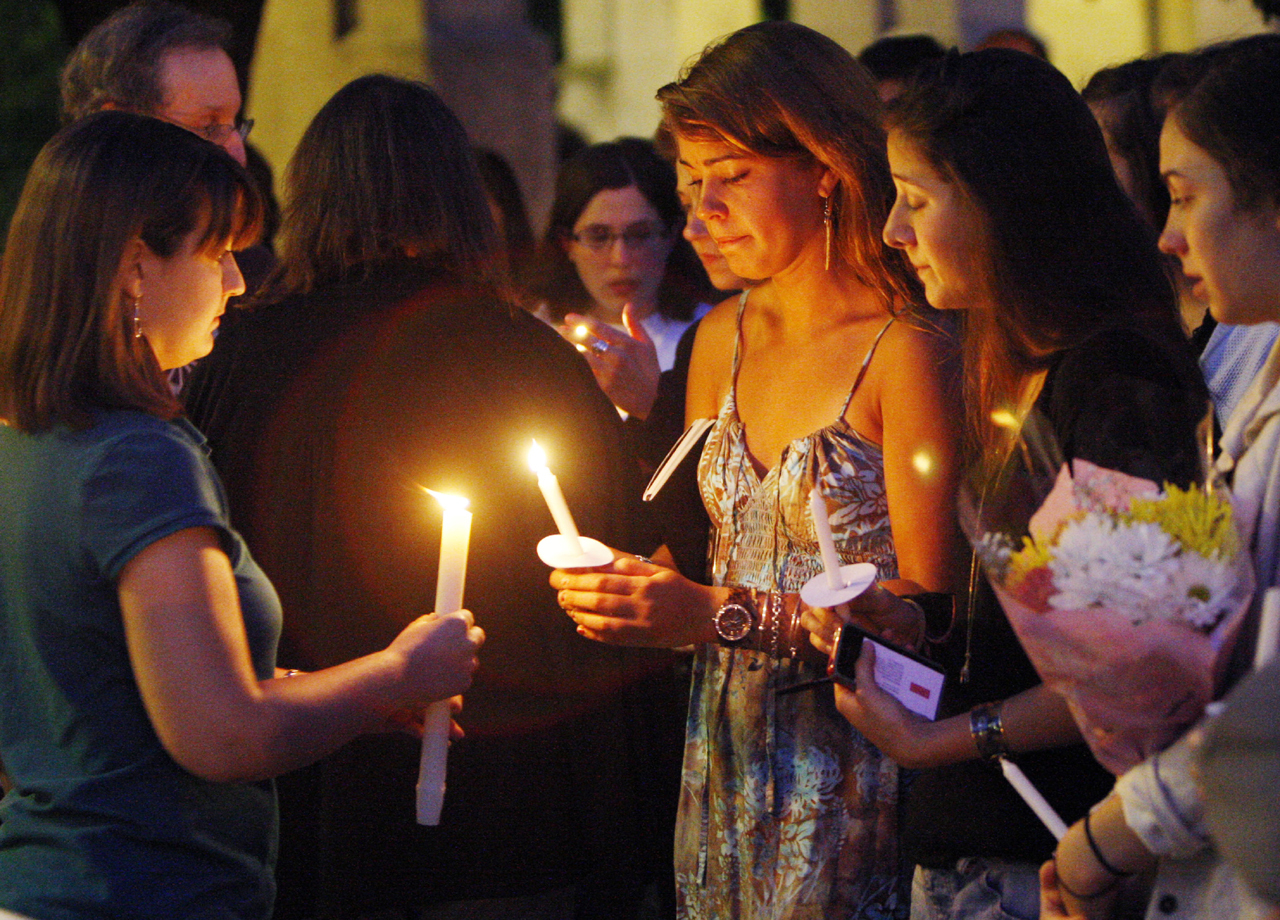 (AP) BOSTON - Tori Pinheiro shed tears and shared the sorrow of the loss of her boyfriend as Boston University students, faculty and officials gathered in a campus plaza to mourn three classmates studying abroad who died in a minivan crash in New Zealand.

Pinheiro told the few hundred who gathered at BU's Marsh Plaza on Saturday night that her boyfriend, Austin Brashears, was among those who died earlier in the day, half a world away. She cried as she recalled how friendly he was and how much she loved him.

She said he recently had left her a voicemail saying he missed her, and she has been playing it repeatedly.

"I listened to it four times, just to hear your voice," she told the crowd as she tried to fight back tears.

Brashears was from Huntington Beach, Calif. The university says the other students killed were Daniela Lekhno, of Manalapan, N.J., and Roch Jauberty, whose parents live in Paris.

"We know these students were alive with hopes, dreams and potential and capacity, all dashed," BU president Robert Brown said.

A deep sense of loss cast a pall over the campus as some students anticipated approaching graduation and others packed at the end of the school year.

Five other students were injured in the accident early Saturday, including one who was in critical condition.

The students were traveling in a minivan near the North Island vacation town of Taupo when the van drifted to the side of the road and then rolled when the driver tried to correct course, New Zealand police said.

Three of the students died at the scene, police said. Another woman was in critical condition at a hospital, while four other students sustained moderate injuries.

New Zealand police said Sunday two injured victims — both women, one 20 and the other 21 — remain hospitalized in stable condition. The other two injured — a 20-year-old man and 20-year-old woman — were released Saturday.

Another BU student, Margaret Theriault, was airlifted from the crash site to a hospital in Taupo and remained in critical condition a day after the accident. In a statement Sunday afternoon, local health official Mary Anne Gill said the 21-year-old woman had surgery Saturday and was in intensive care.

New Zealand police spokeswoman Kim Perks said Sunday that any suggestion as to the cause of the crash at this stage is "just speculation," and that the investigation into the accident "will take some time."

Efforts by The Associated Press to reach family members of Lekhno and Brashears were unsuccessful Saturday. A person who answered the phone at the home of Lekhno's family declined to comment, and a message left at a phone listing for Brashears' family wasn't immediately returned.

Brashears' mother, Julie, told The Boston Globe that he frequently posted new photos on Facebook documenting his adventures in New Zealand, including bungee-jumping off the Auckland Harbor Bridge on his birthday. She said he planned weekend outings for the study abroad group.

"Everyone called him the cruise director," she said. "He wanted to include everybody on the trips. He loved having an eclectic group of friends."

Student body president Howard Male, a friend of Brashears, said the Boston University students had posted Facebook updates in anticipation of the trip, saying they hoped to view scenery captured on film in the "Lord of the Rings" movies.

"They were all so excited to be able to go explore what many guidebooks ... have called some of the most beautiful places on the planet," Male said.

At the university, final exams ended Friday, and there were few outward signs of any socializing on Saturday morning. The student union was deserted. The main activity involved students in the dorms hauling out boxes and pushing rolling bins filled with their belongings to waiting moving trucks or their parents' cars as they scurried to meet a noon deadline to clear out.

Student Marcelle Richard, who was moving out after finishing her freshman year, said news of the other students' deaths was "really upsetting."

"They were abroad, and it's so sad that something has to happen when you are supposed to be experiencing one of the best times of your life," said the 18-year-old Richard, of New Orleans. She said the tragedy will not stop her from going abroad to study later in her college career.

Jordan Nunez, 22, a senior who is graduating next week, said the study abroad program is very popular among Boston University students. He estimates 25 percent to 30 percent of his friends traveled to foreign countries to study.

Still, the New Zealand accident has darkened the mood on campus, he said.

"You think everything's always taken care for you, but things can happen wherever you are in the world," he said. "It's just something that's sad for our community."

Study abroad program executive director Bernd Widdig called the students' deaths an "unprecedented tragedy," the worst to hit the program since it began in the 1980s. The New Zealand part of the program began in 2003 and involves courses at the University of Auckland and Auckland University of Technology.

Sixteen students were traveling in two minivans, on their way to hike the Tongariro Crossing, a famous trek rated as one of the most spectacular in New Zealand. The hike crosses a volcanic crater in the central part of North Island.

Police official Kevin Taylor said it was unclear why the van drifted to the side of the road. He said some of the students were thrown from the vehicle, indicating they may not have been wearing seat belts.