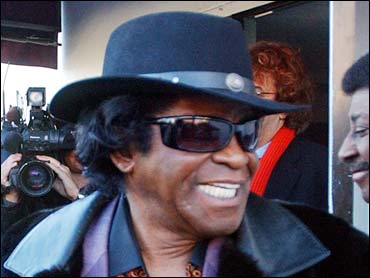 "Mr. Brown has successfully undergone a localized prostate cancer procedure and is resting comfortably," Dr. James Bennett, his urologist, said in a statement. "We expect a full recovery. With proper follow-up and care, we can also expect a full cure."

The 71-year-old "Godfather of Soul" was released Wednesday afternoon from the Midtown Urology Surgical Center in Atlanta.

As he walked out of the clinic to his limousine, Brown was wearing sunglasses, a hat and a big smile.

"I feel good," Brown told reporters outside, playing off the title of one of his most popular songs.

"Mr. Brown has always been a fighter and we are confident that he will be back `on the good foot' soon for another 50 years," said "SuperFrank" Copsidas, Brown's manager.

Brown, best known for hits such as "Please, Please, Please" and "Cold Sweat," announced his diagnosis late last week. Dubbed the "hardest working man in show business," he just finished a two-week Canadian tour. He is expected to spend three weeks recovering from the procedure.

Before the operation, Brown said, "I have overcome a lot of things in my life. I will overcome this as well."

Earlier this year, he faced other troubles when he was charged with domestic abuse after an altercation with his wife. The allegation was resolved when he failed to contest the charge.

Brown is due to release an autobiography next month and is planning a tour of Asia and Australia early next year.