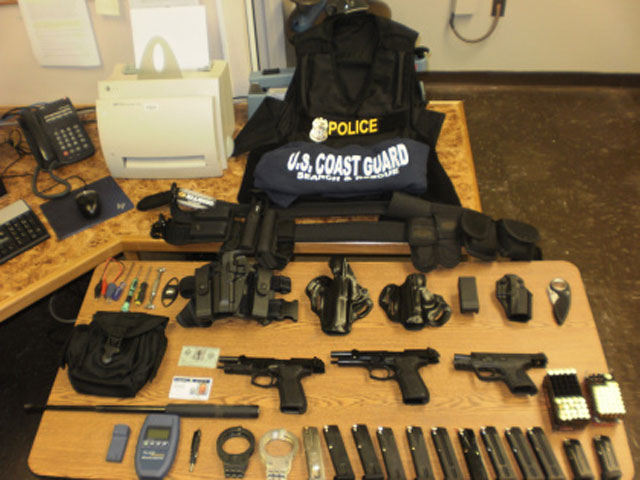 Police reportedly said Bruce W. Browne, of Wolcott, Conn., was  found driving a blue Crown Victoria with three loaded 9mm handguns, a black nylon duty belt with two sets of handcuffs, a police baton, and 12 fully loaded magazines. He also allegedly had a bullet proof vest with the word "POLICE" embroidered on the front and back with a silver metal TSA badge attached, reports the station.

The vehicle reportedly had what appeared to be a disc and antennas mounted on the trunk and "hide-away" lights.

Earlier in the day, Browne allegedly commandeered a boat by identifying himself as a "Police/Coast Guard" official and using an expired Coast Guard identification.

TSA and Coast Guard officials told CBS Boston Browne is not connected with either organization.

Scott Brown said he was estranged from Browne, who has a different mother.

"As you many of you know, my mom and my late father were married and divorced four times each," Brown wrote on his Facebook page. "Unfortunately, we were not close as a family. These are serious charges and he will need to answer them. I feel badly for his children and I am thankful that no one was injured."

The former senator told WMUR-TV in Manchester, N.H., that he last saw Browne at their father's funeral in December. It was unclear why their last names are spelled differently.

Browne also was charged with breach of peace, interfering with a police officer and possession of a dangerous weapon. He was released on $50,000 bond and is due back in court on Aug. 22.

Police say a resident reported that a man wearing military-type clothing was walking with a gun in Old Lyme and was seen earlier in the day with a vehicle that looked like a police car.

In 2010, Scott Brown was a Republican state senator when he upset Democratic state Attorney General Martha Coakley in the election to replace the late Sen. Edward Kennedy. Brown lost the seat in November 2012 to Democrat Elizabeth Warren.