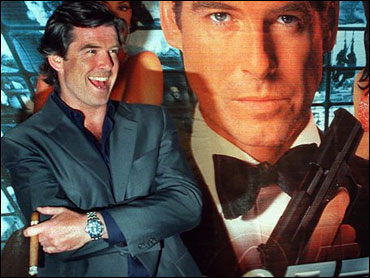 A single, surprising phone call and it was over. That's how Pierce Brosnan says he learned that his services as James Bond would no longer be required.

"One phone call, that's all it took!" the 52-year-old Irish actor tells Entertainment Weekly magazine in its Aug. 19 issue about the decision last year by producers of the Bond films to look for another actor to play the suave British superspy.

Brosnan starred in four Bond films. He says that before they stopped negotiations, the producers had invited him back for a fifth time.

"You know, the movie career for me really started with Bond," says Brosnan, acknowledging that by the time "GoldenEye" premiered in 1995, he was already 42.

His departure from the role was a "titanic jolt to the system," says Brosnan, followed by "a great sense of calm."

"I thought. ... I can do anything I want to do now. I'm not beholden to them or anyone. I'm not shackled by some contracted image. So there was a sense of liberation."

Brosnan says he's grateful to have had the role, but adds: "It never felt real to me. I never felt I had complete ownership over Bond. Because you'd have these stupid one-liners — which I loathed — and I always felt phony doing them."

He plays a foulmouthed, skirt-chasing hit man in the upcoming film "The Matador."

"(For this) to come on the heels of my departure from the world of Bond is sweet grace, to play this one as a farewell to that chapter in time — it certainly wasn't planned."