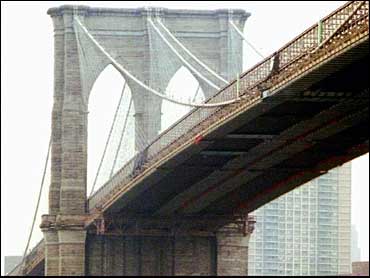 The old joke has it that some gullible person might be willing to buy the famed Brooklyn Bridge which, as we all know, could never be put on the block.

The New York Post reports in its Saturday editions that New York Mayor Michael Bloomberg may propose leasing that span and three others that go from Manhattan across the East River to outer boroughs.

The lessor would be the regional Metropolitan Transportation Authority, which would then impose tolls on the currently toll-free crossings that could bring in an estimated $800 million a year, the Post says.

“You could say the city would be selling the Brooklyn Bridge – and all the other bridges,” the Post quotes a source as saying.

Bloomberg revealed this week that he’s considering imposing tolls on the bridges to raise money for the cash-strapped Big Apple. He didn’t say one way that might happen is through the leasing plan.

The MTA charges tolls on bridges and tunnels it already runs. The lease would be for a nominal yearly fee, says the Post. That could ease the burden on the city of maintaining the bridges, while the city and MTA split the new toll revenues, the Post explains.

Deputy Mayor Marc Shaw told the Post all this talk about tolls and leases is premature. But he added, “All that’s being raised at this point are regional transportation issues and how to pay for them. This is a discussion the administration wants to have with the MTA.”

Instituting tolls on the East River crossings is an idea that’s been floated from time to time in the city, and one that’s never come to pass. But with the city facing a $5 billion budget shortfall, and the electronic “E-ZPass” toll payment system for motorists easing the way, the tolls notion has surfaced again, the Post reports.

For its part, the MTA needs billions for an ambitious capital spending program.

Adding tolls faces tough going. Officials in Brooklyn and Queens are already balking. New York State approval would be needed. Engineers would have a difficult time figuring out just where to put the toll booths on the already jammed arteries. And, adds the Post, a lengthy environmental review would be needed.