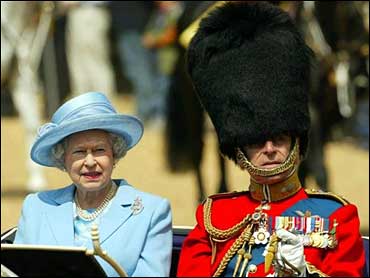 Britain put on one of its grandest annual shows of royal pageantry on Saturday with celebrations of Queen Elizabeth II's official birthday.

In a spectacular display of precision marching and horsemanship choreographed to military band music, about 1,220 soldiers in ceremonial red dress and huge black bearskin caps saluted the monarch in the Trooping the Color ceremony at the Horseguards Parade ground near Buckingham Palace.

The "color" being paraded on London's Horse Guards this year is the flag of the 1st Battalion Irish Guards, and some of the soldiers involved were Iraq war veterans.

The queen turned 79 on April 21, but public celebrations of the British monarch's birthday are always held on a Saturday in June, when the chances of fine weather are good.

Thousands of people filled sidewalks around palace on a partly cloudy day, hoping to catch a glimpse of the queen.

"I've got goose bumps. It's wonderful. I've got to see the queen," said Beryl Sixsmith, 64. She had come to London from her home near Manchester, a city in northern England.

The queen and her husband, Prince Philip, who celebrated his 84th birthday Friday, rode in an open carriage from Buckingham Palace along the wide, tree-lined Mall from the palace to the parade ground near Admiralty Arch.

Prince William, 22, elder son of Prince Charles and the late Princess Diana, rode in a separate a carriage with his stepmother, the Duchess of Cornwall. The duchess, the former Camilla Parker Bowles, married Prince Charles on April 9.

After the hour-long ceremony, the queen and her family gathered on the palace balcony to watch Royal Air Force jets fly overhead in her honor.

"It makes me proud to be British when I see the soldiers marching down the Mall in perfect formation," said Michael Woolstenholmes, 52, a retired teacher in London.

Earlier Saturday, the queen released her annual list of birthday honors to many Britons, including veteran rockers Brian May, Jimmy Page, John Mayall and Midge Ure.

Others on the diverse list of the honored included the chief rabbi, a leading television actor, and a woman who advises rail passengers.

May, guitarist with rock group Queen, was made a Commander of the Order of the British Empire, or CBE, for services to the music industry. He played a prominent role three years ago in celebrations for the 50th anniversary of the queen's coronation, playing "God Save the Queen" from the roof of Buckingham Palace.

Page, a founding member of Led Zeppelin, was named an Officer of the Order of the British Empire, or OBE, for services to disadvantaged children in Brazil.

John Mayall, known as the father of British blues, and his fellow musician Midge Ure, who has worked with Bob Geldof on the Live Aid and Live 8 campaigns to reduce poverty, also received OBEs.

Oscar-winning actress Dame Judi Dench, who has played everybody from Queen Victoria to James Bond's boss, M, was made a Companion of Honor — a select group limited to 65 persons at any one time.

Actor David Jason, who played a police detective in "Frost," and a fast-talking trader in the British sitcom "Only Fools and Horses," was knighted, as was Rod Eddington, outgoing chief executive of British Airways.

There were also knighthoods for Chief Rabbi Jonathan Sacks, Iqbal Sacranie, secretary-general of the Muslim Council of Britain, and Hugh Orde, since May 2002 the chief constable of the Police Service of Northern Ireland.

Of the 894 names on the list, more than 500 — some 60 percent — are involved in voluntary work of some kind, according to Prime Minister Tony Blair's office, which draws up the list for the monarch to approve.

There were CBEs for Tim Bevan and Eric Fellner, co-chairmen of Working Title Films, the successful British film company that has produced such movies as "Four Weddings and a Funeral," "Notting Hill" and "Bridget Jones's Diary."

Frank Gardner, the British Broadcasting Corp. security correspondent who was paralyzed in an attack by militants in Riyadh, Saudi Arabia, received a similar award. His cameraman, Simon Cumbers, was killed in the attack.