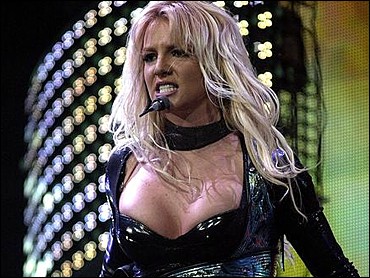 Britney Spears fans don't just bring their enthusiasm to her shows, they bring their wallets. Signatures Network, which handles merchandising for Spears' concert tour, says she's pulled in over $30 million for her Onyx Hotel tour. That makes her the biggest seller of merchandise for a solo female artist in the last five years.

The best-sellers are the pink baby doll T-shirt that says "Toxic" on the front, the Onyx Hotel fashion jersey and the tour programs and posters.

Spears starts her European tour in London Tuesday night, and she brings the tour back to the U.S. in late June.

In January, the pop superstar caused a stir when she married her childhood friend at a 24-hour chapel in Las Vegas. The wedding was annulled a little over two days later, but not before it made headlines around the world.

The fuss over her brief marriage was preceded by her appearance last year at the MTV Video Music Awards, during which she kissed Madonna. MTV, like CBSnews.com, is owned by Viacom.

Afterwards, she talked to the BBC about her relationship with Madonna, saying there is a special connection between them.

"She's a he's like my godmother in a way," she said. "I don't listen to that many people, I'm a very stubborn person.

"When someone tells me not to do something, I do it, that's just my rebellious nature."