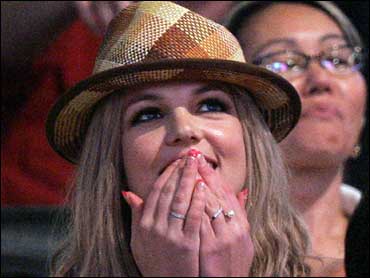 Last night, Britney Spears performed an encore of the concert she did in San Diego on Tuesday night — this time in Anaheim, Suzie Suh from KCBS in California reports. The singer is reportedly planning a whole series of small concerts around the country.

Spears did a five-song set at the House of Blues in San Diego, starting off with her classic "Baby One More Time," CBS News correspondent Drew Levinson reported Tuesday.

The 25-year-old mother of two wore a long, brown wig, a pink top and a short white skirt with her belly ring out. It's believed to be her first live performance in almost three years.

She didn't talk about her kids, her stint in rehab or her divorce from Kevin Federline, she just told the crowd, "Thanks everyone for coming." The club was packed and afterward word spread on the Internet.

"It looked like she lip-synched her way through the whole thing," Morgan Segall, 20, told The Associated Press.

During one moment in the show, a young man in the audience was brought on stage and seated on a chair where he enjoyed a sexy performance from Spears and her backup dancers. Some celebrity blogs are saying that the lucky guy was Spears' rumored boyfriend, singer Howie Day.