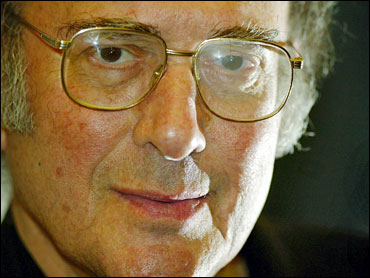 British playwright Harold Pinter, who juxtaposed the brutal and the banal in such works as "The Caretaker" and "The Birthday Party" and made an art form out of spare language and unbearable silence, won the 2005 Nobel Prize in literature Thursday.

Pinter "in his plays uncovers the precipice under everyday prattle and forces entry into oppression's closed rooms," the Swedish Academy said. The chilling, understated style of his work even inspired an adjective all his own: Pinteresque.

"I feel quite overwhelmed," Pinter, 75, said outside his London home. "I had absolutely no idea."

He said he was "speechless" when told he had won, but added: "I have to stop being speechless when I get to Stockholm."

Starting with his breakthrough play, "The Caretaker," Pinter codified a style in the 1950s and '60s of verbal evasion and violence, menace both spoken and not. His influence has been felt throughout British literature, and across the ocean in the work of American playwrights Sam Shepard and David Mamet.

"Pinter restored theater to its basic elements: an enclosed space and unpredictable dialogue where people are at the mercy of each other and pretense crumbles," the academy said.

His other works include "The Room" and "The Dumb Waiter."

One of the most influential British playwrights of his generation, Pinter in recent years has turned his acerbic eye on the United States and the war in Iraq.

He has been an outspoken critic of British Prime Minister Tony Blair and vehemently opposed Britain's involvement in the war. He told the BBC in an interview in February that that he would continue writing poems but was taking a break from plays.

"I have written 29 plays and I think that's really enough. I think the world has had enough of my plays," he said Thursday.

In 2003, Pinter published a volume of anti-war poetry about the Iraq conflict, and in 2004 he joined a group of celebrity campaigners calling for Blair to be impeached.

Pinter has also written screenplays, including "The French Lieutenant's Woman" in 1981 from the John Fowles novel, as well as "The Accident," "The Servant" and "The Go-Between."

Pinter is the first Briton to win the literature award since V.S. Naipaul won it in 2001.

The son of a Jewish dressmaker, Pinter was born in London on Oct. 10, 1930. Pinter has said his encounters with anti-Semitism in his youth influenced him in becoming a dramatist. The wartime bombing of London also affected him deeply, the academy said.

Most prolific between 1957 and 1965, Pinter relished the juxtaposition of brutality and the banal and turned the conversational pause into an emotional minefield.

His characters' internal fears and longings, their guilt and difficult sexual drives are set against the neat lives they have constructed in order to try to survive.

Usually enclosed in one room, they organize their lives as a sort of grim game and their actions often contradict their words. Gradually, the layers are peeled back to reveal the characters' nakedness.

"As a writer, Harold has been unswerving for 50 years," said Stoppard, whose plays include "Rosencrantz and Guildenstern Are Dead" and "Jumpers." "With his earliest work, he stood alone in British theater up against the bewilderment and incomprehension of critics, the audience and writers too."

David Hare said the academy had made "a brilliant choice."

"Not only has Harold Pinter written some of the outstanding plays of his time, he has also blown fresh air into the musty attic of conventional English literature, by insisting that everything he does has a public and political dimension," said Hare, whose own politically charged dramas include "The Permanent Way" and the Iraq war drama "Stuff Happens."

Last year's winner was Austrian feminist Elfriede Jelinek. Her selection drew such ire that a member of the academy publicly blasted his colleagues for picking her. Knut Ahnlund, 82, who has not played an active role in the academy since 1996, resigned Tuesday after he wrote in a signed newspaper article that picking Jelinek had caused "irreparable damage" to the award's reputation.

The academy, founded in 1786 by King Gustav III to advance the Swedish language and its literature, has handed out the literature prize since 1901. To date 102 men and women have received the prize, including France's Jean-Paul Sartre, who declined the 1964 prize.