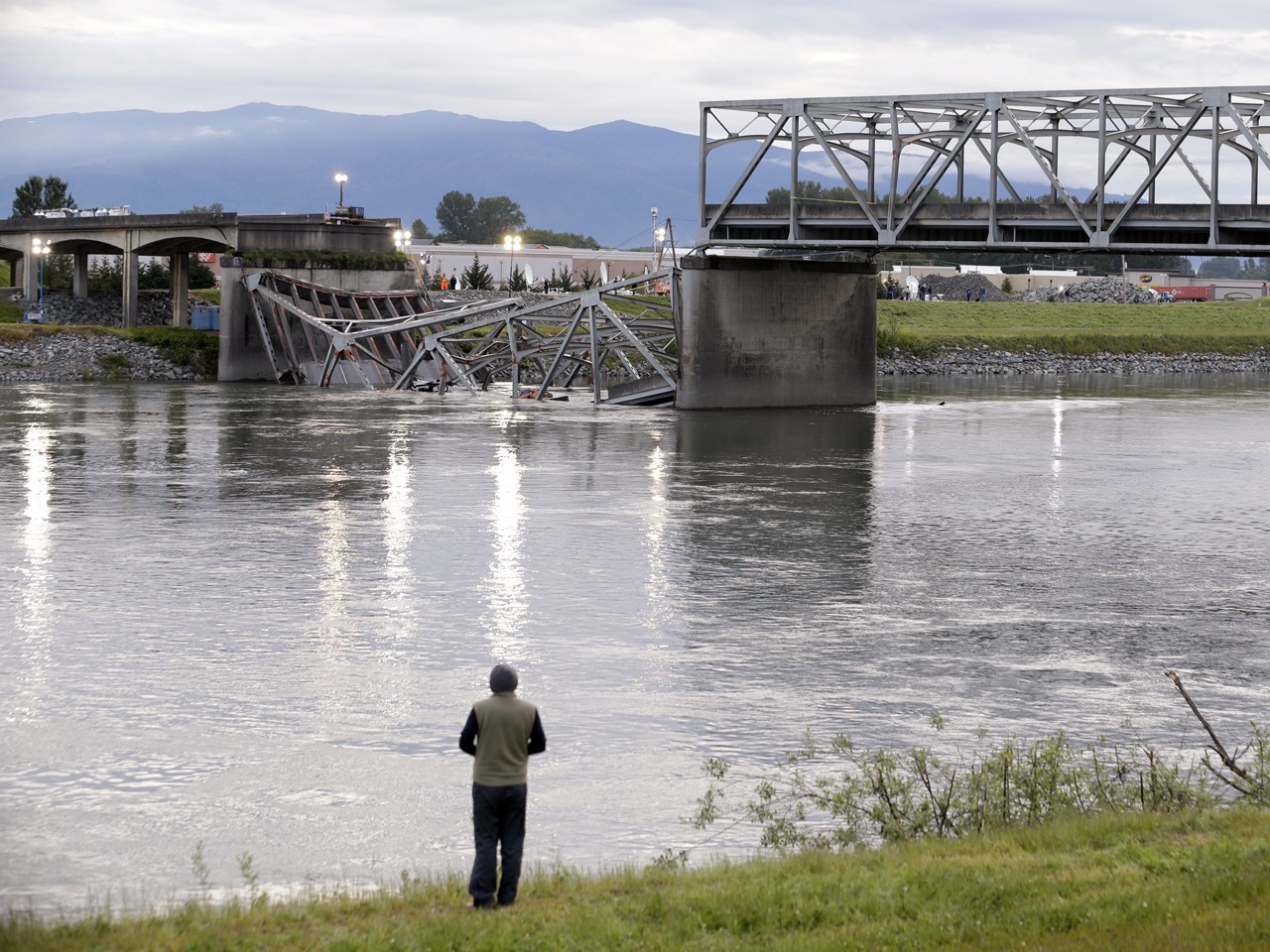 MOUNT VERNON, Wash. A truck hauling an oversized load of drilling equipment hit an overhead bridge girder on the major route between Seattle and Canada, sending a section of the interstate into the river below as the driver watched the structure collapse in his rearview mirror.

Two other vehicles plunged into the Skagit River, but all three occupants escaped with only minor injuries.

"He looked in the mirrors and it just dropped out of sight," Cynthia Scott, the wife of truck driver William Scott, said Friday from the couple's home near Spruce Grove, Alberta, just west of Edmonton. "I spoke to him seconds after it happened. He was just horrified."

The spectacular scene unfolded about 7 p.m. Thursday on the north section of the four-lane Interstate 5 bridge near Mount Vernon, about 60 miles north of Seattle and 40 miles south of the Canada border, and disrupted travel in both directions. Officials warned it could be weeks or months before things returned to normal along the heavily travelled corridor.

At a news conference Friday, Washington Gov. Jay Inslee said federal officials were searching the country for a possible temporary replacement for the bridge.

Inslee said federal officials are looking for a pre-fabricated structure to replace the 160-foot section that fell into the river. If one is found, Inslee said a temporary fix could be in place in weeks. If one can't be quickly secured, the governor said it could be months before a replacement can be built.

"You cannot overstate the importance of this corridor to Washington state," Inslee said. Traffic on the interstate and surrounding roads was backed up for miles throughout the area, a situation that the governor said would continue indefinitely.

"There will be substantial delays," he said.

The Washington State Patrol said the truck driver works for Mullen Trucking in Alberta. The tractor-trailer was hauling a housing for drilling equipment southbound when the top right front corner of the load struck several trusses on the north end of the bridge, the patrol said.

"He hit the bridge about 3 or 4 feet wider than the actual bridge was, and we went right off with the bridge as it collapsed," Sligh told reporters from a hospital.

Last August, Barry LePatner, author of "Too Big to Fall: America's Failing Infrastructure and the Way Forward," told CBS News correspondent Jeff Glor on "CBS This Morning" that the next bridge disaster was much closer than anyone wants to believe.

"Since 1989," LePatner said, "we've had nearly 600 bridge failures in this country and, while they're not widely publicized ... a large number of bridges in every state are really a danger to the traveling public."

In Thursday's accident, the driver voluntarily gave a blood sample for an alcohol test and was not arrested. A top company official said Scott was amazed by what he saw happen.

"He's a little bit bewildered," Ed Scherbinski, vice president of Mullen Trucking, said in an interview with The Associated Press.

Initially, it wasn't clear if the bridge just gave way on its own. But at an overnight news conference, Washington State Patrol Chief John Batiste blamed it on the too-tall load. The vertical clearance from the roadway to the beam is 14.6 feet.

The truck made it off the bridge and Scott remained at the scene and cooperated with investigators. Two other vehicles went into the water about 25 feet below as the structure crumbled. Three people were rescued and were recovering Friday.

The trucking company said it received a state permit to carry its oversized load across the bridge. Scherbinski said the state Department of Transportation had approved of the company's plan to drive the equipment along I-5 to Vancouver, Wash.

He also said the company hired a local escort to help navigate the route. The driver was well-experienced with handling oversized loads, he said.

"This is what we do for a living. We pride ourselves in doing things the proper way," Scherbinski said.

Mike Allende, a state DOT spokesman, confirmed the truck had its permit.

"We're still trying to figure out why it hit the bridge," he said. "It's ultimately up to the trucking company to figure out whether it can get through. It's their responsibility to make sure the load they have can travel on that route."

Dave Chesson, a state DOT spokesman, said there were no signs leading up to the bridge warning about its clearance height.

Inslee — who issued an emergency proclamation for surrounding Skagit, Snohomish and Whatcom counties — said it will cost $15 million to repair the bridge. The federal government has already promised the state $1 million in emergency funding.

Traffic could be affected for some time. The bridge is used by an average of 71,000 vehicles a day, so the roadblock will cause a major disruption in trade and tourism between Seattle and Vancouver, British Columbia.

The Washington Transportation Department has set up detours. The closest bridge nearby is mostly used for local traffic between Mount Vernon and Burlington. The department also is recommending detours using state Routes 20 and 9 that add tens of miles to a trip. Drivers are urged to avoid the area if possible, especially over the Memorial Day weekend.

Sligh and his wife were in their pickup on I-5 heading to a camping trip when he said the bridge before them disappeared in a "big puff of dust."

"I hit the brakes and we went off," Sligh told reporters from a hospital, adding he "saw the water approaching ... you hold on as tight as you can."

Sligh and his wife were taken to Skagit Valley Hospital with non-life-threatening injuries. The other man was reported in stable condition at United General Hospital in Sedro-Woolley, hospital CEO Greg Reed said.

The bridge was inspected twice last year and repairs were made, Transportation Secretary Lynn Peterson said.

"It's an older bridge that needs a lot of work just like a good number of bridges around the state," she said.

The bridge was not classified as structurally deficient, but a Federal Highway Administration database lists it as being "functionally obsolete" — a category meaning that the design is outdated, such as having narrow shoulders and low clearance underneath.

The bridge was 1,112 feet long and 180 feet wide, with two lanes in each direction, state DOT spokesman Noel Brady said. There are four spans, or sections, over the water supported by piers. The span on the north side is the one that collapsed. It's a steel truss bridge, meaning it has a boxy steel frame.

The mishap was reminiscent of the August 2007 collapse of an I-35W bridge in Minneapolis that killed 13 people and injured another 145 when it buckled and fell into the Mississippi River during rush-hour.

"You're kind of pinching yourself and realize you're lucky to be alive."