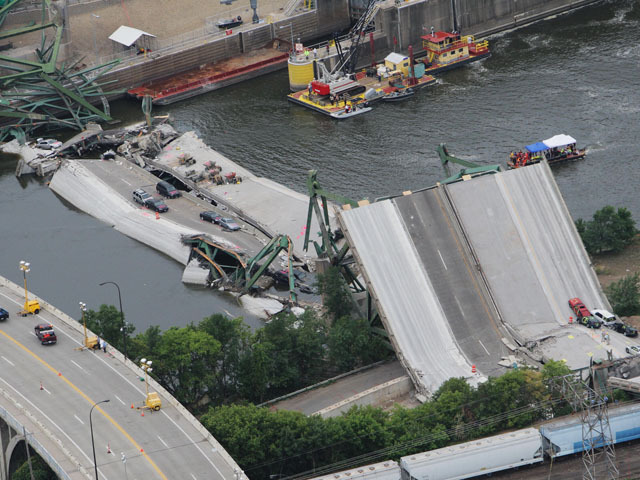 (CBS News) Every time you drive over a bridge, you might wonder how strong it is. The facts show America's bridges are getting weaker every day.

The federal government says 1 out of 8 bridges is considered structurally deficient.

The collapse of the I-35 bridge in Minneapolis, five years ago last week, was the most dramatic and horrific example of what can happen.

"That bridge tragically cost the lives of 13 people and injured another 145," points out Barry LePatner, author of "Too Big to Fall: America's Failing Infrastructure and the Way Forward."

He says the next disaster is much closer than anyone wants to believe. "Since 1989," LePatner notes, "we've had nearly 600 bridge failures in this country and, while they're not widely publicized ... a large number of bridges in every state are really a danger to the traveling public."

The most recent federal highway report, in 2009, found that, of the 600,000 bridges in the U.S., 72,000 were "structurally deficient," meaning in poor condition. Eighteen-thousand were deemed "fracture critical," meaning there's no redundancy: If one piece fails, the whole bridge does.

Nearly 8,000 bridges fell into both those categories, including the longest bridge in New York State, the Tappan Zee, which is now seven years beyond its intended 50-year lifespan and carrying much more traffic than it was designed to handle.

"It's a dinosaur -- that's the issue," says Rockland County Executive C. Scott Vanderhoef, who believes infrastructure has taken a back seat during tough economic times.

Former Pa. Gov. Ed Rendell discussed the infrastructure problem with to "CBS This Morning" co-hosts Charlie Rose and Gayle King. To see the interview, click on the video at left.

Though people would think making sure structures like the Tappan Zee are safe would top the priority list of officials who make such decisions, "We've debated it and studied it for over a decade," Vanderhoef says. " ... You've got to bite the bullet and replace these aging infrastructures before you do have a serious problem."

Replacing the Tappan Zee Bridge will cost at least $5 billion.

LePatner says fixing every one of the most at-risk bridges in the U.S. would cost up to $60 billion. He's not holding his breath. "I'm hoping ... we are going to confront our politicians and make them address the perilous state of our nation's infrastructure once and for all," he says, adding that, in many of these cases, the money is available but the political will isn't.