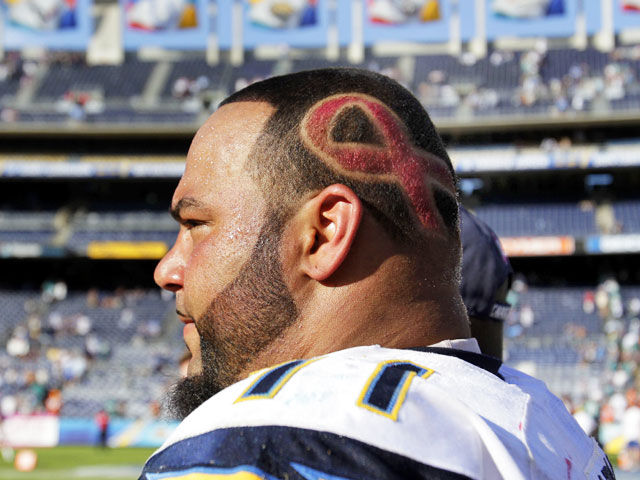 (CBS/AP) What does it mean when everyone on an NFL football field is wearing pink?

Coaches, players, and even referees will be donning pink caps and cleats for October's breast cancer awareness month. In an initiative to remind women 40 and older about the importance of annual mammograms, the league collaborated with the American Cancer Society.

Footballs included pink ribbon decals, goal posts were padded in pink, and the color was painted on fields all around the NFL.

Breast cancer kills nearly 40,000 women each year, while another 230,000 are diagnosed. Women should be screened once a year starting at age 40, the American Cancer Society recommends. The Society also advises women to start conducting breast self-exams in their 20s and to see a doctor if they detect any unusual lumps.

Patriots quarterback Tom Brady was among those who had pink towels hanging from their waists. Many of the defending Super Bowl champion Green Bay Packers wore pink-and-white gloves and pink-and-black shoes. Chargers nose tackle Antonio Garay took his tribute to another level, having a pink ribbon shaved into the left side of his head.

Arizona's Larry Fitzgerald, a spokesman for the league-wide awareness campaign wore pink shoes in the Cardinals' loss to the New York Giants. His mother died of breast cancer.

The American Cancer Society has more on breast cancer.