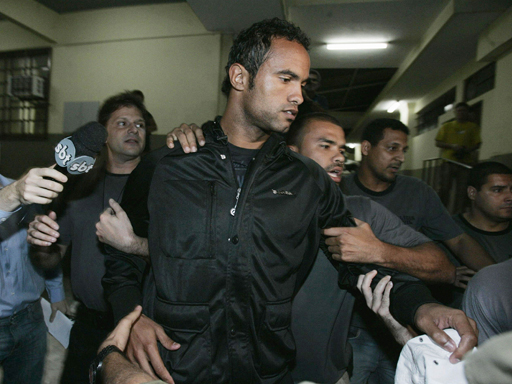 The goalkeeper, along with Luiz Henrique Romoa, a friend of Souza, and Luiz Aparecido Santos, a former police detective, are all suspects in the disappearance and alleged murder of the 25-year-old Samudio, who has been missing since early June.

Souza was taken from a prison in the central city of Belo Horizonte to a police investigative unit's headquarters for the sample taking. All three suspects reportedly refused to cooperate. Police Inspector Edson Moreria told reporters that "the lawyers told the suspects not to give us any material, and they were not legally forced to do so."

Samudio had been trying to prove that Souza was the father of her 4-month-old son.

Authorities say she was abducted in Rio de Janeiro, driven to Belo Horizonte and murdered at a suburban house. According to Moreria, Santos strangled Samudio to death last month, and Souza was at the house during the killing. Her body has not been found.

On Thursday, authorities flew Souza and Romao from Rio de Janeiro to Belo Horizonte, which is the central location of the investigation, and where investigators continued to search for Samudio's body at a house owned by Souza and another one rented by her alleged killer.

Homicide detective Wagner Pinto told reporters Thursday that police have sufficient evidence to charge the suspects with kidnapping, assassination and hiding of a body - regardless of whether or not the body is found.

No charges have yet been filed. Brazilian law states that prosecutors can file charges once police investigations have closed their investigations.