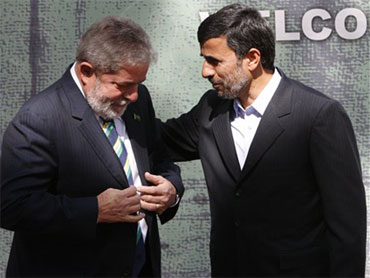 Brazil's president met with Iranian leaders Sunday to try to broker a compromise in the international standoff over Tehran's nuclear program, even as the U.S. says new sanctions are the only way to force Iran's cooperation.

Luis Inacio Lula da Silva is trying to use Brazil's friendly relations with Iran to show it can be a fair, neutral broker in the escalating dispute. Since evidence of a clandestine Iranian nuclear program first emerged in 2003, negotiations with world powers and visits by U.N. inspectors have failed to persuade the U.S. and its allies that Iran is not pursuing a weapons capability.

The Brazilian president is reportedly trying to revive a U.N.-backed proposal in which Iran would ship its stockpile of enriched uranium abroad to be processed further and returned as fuel rods for a medical research reactor.

Silva began his visit by meeting with Iranian President Mahmoud Ahmadinejad. In the afternoon, he was to meet Iran's supreme leader, Ayatollah Ali Khamenei.

Iran maintains its nuclear work is only for peaceful purposes, like energy production. But the U.N. nuclear monitoring agency says Iran has not fully cooperated with its investigation to determine whether it has a military dimension.

The U.N. plan, first proposed in October, would deprive Iran of stocks of enriched uranium that it could process to the higher levels of enrichment needed in weapons production. The material returned to Iran in the form of fuel rods could not be processed beyond its lower, safer levels, which are suitable for use in the Tehran research reactor.

Iran initially accepted the deal but then balked and proposed changes rejected by the world powers negotiating with Tehran: Germany and the five permanent members of the U.N. Security Council, which are the United States, Britain, France, Russia and China.

On Friday, U.S. Secretary of State Hillary Rodham Clinton said Iran will continue to defy demands to prove its nuclear program is peaceful unless it is hit with a new round of U.N. sanctions.

"Every step along the way has demonstrated clearly to the world that Iran is not participating in the international arena in the way that we had asked them to do and that they continued to pursue their nuclear program," Clinton told reporters.

She also predicted that Silva's mediation effort would not succeed.

Silva met in Moscow on Friday with Russian President Dmitry Medvedev, who said the Brazilian leader's efforts might be "the last chance before the adopting of known decisions in the Security Council."