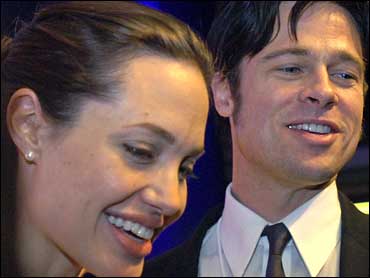 Angelina Jolie and Brad Pitt will give the world its first peek at their newborn daughter by releasing photos of Shiloh Nouvel, with profits going to charity.

The images, taken at a private photo shoot, will be distributed by Getty Images, the photo agency said Monday. All profits will be given to charity, though no specific foundation was announced.

"While we celebrate the joy of the birth of our daughter, we recognize that two million babies born every year in the developing world die on the first day of their lives," the couple said in a joint statement. "These children can be saved, but only if governments around the world make it priority."

Deb Trevino, a spokeswoman for Getty Images, told The Associated Press the family would later name the charity that will receive the money. She would not disclose how much the photos were being sold for, or when they would be distributed.

A call by the AP to Pitt's publicist, Cindy Guagenti, was not immediately returned Monday.

Shiloh Nouvel Jolie-Pitt was born May 27 in Namibia. In the weeks leading up to the birth, the couple retreated to the African country for government-assisted privacy. Delivered by Caesarean section, the baby weighed 7 pounds and was said to be in good health.

The couple have yet to make a public appearance since the birth.

Jolie, 30, has two adopted children: 16-month-old Zahara, from Ethiopia, and 4-year-old Maddox, from Cambodia. Both had their surnames legally changed to Jolie-Pitt after Pitt announced his intention to adopt the children as well.