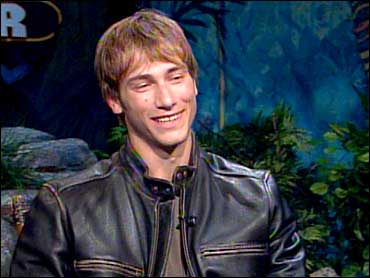 On "Survivor: Guatemala," the newly merged tribe got off to a rough start. It was even rougher for Kansas farmer Brandon Bellinger, who couldn't overcome the numbers game and was the first to be put out to pasture.

It was not a surprise.

"I knew a long time ago," Brandon tells The Early Show co-anchor Harry Smith. "I mean, back when Amy (O'Hara) got voted off, like when we had the puzzle challenge, I was like, we've got to win this, otherwise Amy might go off and, god, I don't know. Then I was like, dude, I'm going off right after that. I played too strong of a game."

The only surprise came after the game, watching the show on TV and seeing Bobby Jon Drinkard making deals with Stephenie LaGrossa.

"I was somewhat surprised. Bobby Jon, he's a good buddy of mine and everything. And you see him kind of cut that deal with Stephenie," Brandon says. "Sometimes he is talking like 'I can't stand Stephenie' and all that stuff. 'I can't stand to be around her.' But the next thing you know he's hugging her. But Bobby Jon was trying to further himself in the game. I can't blame him for that."

Brandon's doom was evident, but he still tried to pump himself up to continue in the game. "You're always running out of gas. But you got a little extra petroleum, like, kick it into gear, go after it, man. Trying to work yourself up a little bit, psych yourself out a little bit."

In an exclusive scene for The Early Show, he is seen by himself, reflecting on the game:

"Things are starting to get a little bit tough. Don't have a lot of hope, to tell you the truth, of getting any further in this game. This is the end and I can feel it coming up on me. And I almost just want to quit. I want to lay down and die, I guess. Part of me does, but the other part of me says 'fight on and never give up.' "

"It was a great moment," Brandon says about the dramatic intensity of his monologue. "I was trying to prepare myself for the whole deal."

His only chance for survival was to get immunity, and there were two opportunities for it.

One was finding the immunity idol hidden in the jungle.

"That dirty sucker," Brandon says. "That's your one last chance, find this immunity idol hidden somewhere on this 10 acres of jungle, six-inch figure. And you're wandering all over the place looking up, down, all around, looking for this dang thing."

Like the others, he worked hard to find it to no avail. "They all set out right at once hoping to find it under the first rock and I realized, dude, it's going to be like a needle in the haystack and hard to find this sucker."

The other opportunity to keep playing was to get the immunity necklace. The challenge was to get to the top of Mayan pyramid first balancing a clay pot on his head.

After that challenge, Bobby Jon convinced Brandon, a former Nakum member, that he was fed up with Jamie Newton's big mouth, making the six members of Nakum look like the evil tribe.

"I was really thinking like, this is 'Survivor,' things change just like that, man," Brandon says. "But deep down inside, I knew it was me. They had all their ducks in a row and I didn't have enough time to work my way into whatever. "

Since the merge, it was clear it was going to be a numbers game. Gone were the fun times for Yaxha.

"We go there, back in the Nakum camp. They were kind of down and depressed," Brandon explains. "They were complaining about quite a bit. And life was really good. I keep thinking back, like when it was me, Gary, Bobby Jon, Danni and Amy. We had such a good time. It was so great. Then we'd go to the merge, and you are just a little bit down."

The highlight for him was winning the pool for his tribe.

"When we won the pool after I chopped through that rope, that was the best feeling," he says. What was his secret to cutting that rope so fast? "When we were cutting the rope earlier in camp while setting up the tarp, I just realized it cut a lot faster when you use all your body weight."

Looking back he regrets not having voted off Bobby Jon when he had a chance. Both Bobby Jon and Stephenie had had their chance.