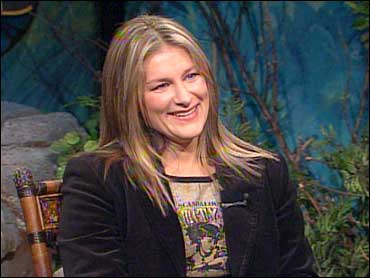 Being the strongest woman on "Survivor: Guatemala" wasn't enough to keep police Sgt. Amy O'Hara from being voted off by her fellow Yaxha tribe mates.

"When you see yourself getting voted out you wish you could stay," Amy tells The Early Show co-anchor Harry Smith. "I know I did everything I could have possibly done to stay. I'm happy."

Her only regret was not making it to the merge.

"After seeing myself get voted off and then they merge right away, I was like, oh, I can't believe this!" she says. "I was this close to making the merge. You want to make the merge when you're there. If there's one thing I look back on, it's, man, I wish I made the merge."

But even while in Guatemala, she knew her number was up when Tribal Council came.

"I definitely knew I was leaving," she says. "I knew it was going to be down to Gary (Hogeboom) and myself, but I really knew it would be me going home. I did everything I could do to try to persuade Danni Boatwright. She had to vote for Bobby Jon (Drinkard), and I tried to go against Gary, too."

Did she know he was a pro football player?

"We knew. We really didn't care. I would just rag him on it," she says. A secret scene shows both tribes hanging out by Yaxha's pool just having fun. But Gary is still in the hot seat with his identity in question.

"I wish I was," Gary tells Jamie Newton, who was not so convinced.

"There is a rumor when we got to camp that Gary was a professional football player," Jamie was seen saying just to the cameras." I don't know what they're saying. He still might be, but who knows."

But Gary is sticking to his plan. Also, just to the cameras, he says, "I'm not blowing my strategy. I'm keeping it."

So what was it like for both tribes to mingle at the pool?

"Gary said, let's not talk game. Let's have fun with this," Amy says. "I went along with it. But I was watching every move everybody made. I wanted to see what was going on. So I was just playing the game there, just seeing what everybody was thinking and acting together."

Throughout the game she gave 100 percent. And her determination shined when she pushed the gigantic ball, even after being knocked down.

"When I went down there, I snapped my ankle. It was bad," she says. "I still have problems with my ankle today. But I got really mad when that happened. I knew that I could really excel on this challenge. I just came back and really kicked some butt there because I was angry."

Amy was also pushed to the limit on the zip line.

Being in Guatemala as a survivor was the toughest thing she has ever done "without a doubt. That was extremely difficult," she says. "Just being out there and not having the comforts of life. You're stripped to your soul. You really are."

She still holds warm feelings for her tribe.

"Bobby Jon, Brandon (Bellinger), Danni and Gary, these people are down to earth, hard workers," she says. "They're great, great people. I enjoyed their company. It was awesome."

Now that Amy is out of the game, her challenge is to deal with her friends at the police force in Revere, Mass.

"Every day I go into work on Friday, and I have to hear their comments about everything," she says. "They sort of razz me on everything. They torture me on a few things, but I think most of all they're proud of me. They say, 'Man, I can't believe you did that.' I have a lot of fun with them."

Amy did everything she could, but she didn't make it. Harry Smith says that it is similar to the feeling Red Sox fans get most every season.

"And the Yankees this season, too," she retorts.