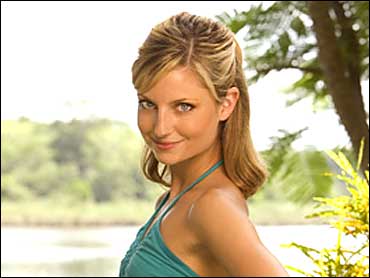 This story was written by CBSNews.com's Stephen Smith


It is not good to show laziness on sowing cornfields because the ears of corn will end up twisted.
~Mayan proverb

A 21-year-old from Decatur, Ill., learned this Mayan lesson the hard way and was promptly voted out of the "Survivor: Guatemala" jungle.

A week after 63-year-old Jim was banished from the Mayan ruins, the Yaxha tribe seemed poised to target another "less athletic" and older competitor. But that all changed when Morgan, a lithe magician's assistant, was unceremoniously booted in a stunning tribal council.

Most in the Yaxha tribe said they were ready to give Lydia, a 42-year-old fishmonger from Lakewood, Wash., the old heave-ho. But it was not to be.

Morgan held a sizeable athletic advantage over Lydia, having performed well in the immunity challenges. But, in the end, it was her laziness that doomed her. Said Gary: "Morgan is not doing enough around camp."

Lobster Recipe From The Iron Chef

Wrestler explains why he wouldn't take on a girl

The drama unfolded early. As the tribes scurried up a rope spider web to retrieve bags, Yaxha held a slight lead. But Blake, who fell out of favor in the first week with his penchant for nausea, would earn redemption. He outlasted Brian in the final seconds and Nakum won a litany of must-haves: worms, fillet items, corks, weights and twines (otherwise known as fishing gear).

Fishless, Yaxha was left digging weeds and pondering the nutritional value of ants.

Things would only get worse for Yaxha. Challenged to a tug-of-war for immunity, the tribe fought to a mud-filled showdown. Alas, Yaxha could not match up with the Nakum brawn during one-on-one tie-breakers.

Then things got really interesting. During a tense mud-wrestling shove-off in middle of the ring, Danni made a quip about Brian's teammate, Gary.

Ex-NFL quarterback Gary, who has up until now withheld his identity, was later confronted by Brian about his past profession.

The denials continued. "I think I'd be voted off immediately," Gary reasoned in private.

As in week one, Gary's teammates seemed awed by his height and gray hair. Whispers were traded. Alliances were formed. Lydia was targeted.

Sensing her impending demise, Lydia sat down with the quarterback-turned-gossiper. "I'm not ready to go, Gary," she sniffled.

And, remarkably, she wasn't. Morgan received five of the first six votes.

"We have a spa appointment waiting for you," Morgan's parents said in a videotaped message.

And The Early Show has questions waiting for Morgan, who will be there Friday morning to defend her laziness.
By CBSNews.com's Stephen Smith