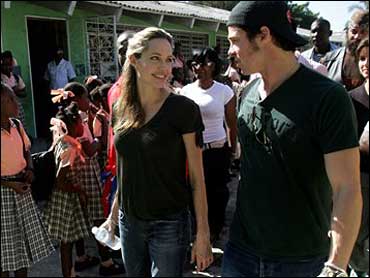 Don't believe what you may have seen, heard or read about Brad Pitt not being in the room when Angelina Jolie gave birth to the couple's daughter, Shiloh Nouvel, on Saturday.

"People did confirm, although the couple is not officially releasing a lot of information, that Brad Pitt was at her side," Cagle told co-anchor Rene Syler Monday. "Some of the tabloids reported he was waiting in the hall with her brother and all this stuff. No, he was with her in the room."

Both mother and daughter are said to be doing fine.

"She had the baby on Saturday night in Africa, in Namibia, in actually a very cosmopolitan little area in a place called the Cottage Hospital," Cagle said. "(It's) actually a very respected little hospital, and renowned for its childbirth facilities."

On reports it was a water birth or a Caesarean-section, Cagle commented, "They have not released any details. I have a feeling that the water birth is a rumor. But there's also a lot of speculation about a C-section. They just haven't said anything about that yet."

"Shiloh," Cagle continued, "is a Hebrew name meaning "the peaceful one," or "the one who was sent."

He joked, "This kid is basically named after the Messiah and has to look like Brad Pitt and Angelina Jolie, so there's a lot to live up to."

"First of all, she loves that region. She did a movie a few years ago called 'Beyond Borders,' and she really full in love with Africa. I think she liked the idea of maybe having this child in Africa because her other two adopted children are from places overseas.

"But probably the media is a big reason for it. I think that the Namibian government stepped in, and they really protected the couple and kept the journalists at bay. Obviously, the two of them had a huge security force of their own. Could you imagine if the LAPD had stepped in and protected them? I mean, there would have been such an outcry, so they were protected."

The Namibian government worked hand-in-hand with Pitt and Jolie to keep away all but the journalists they wanted around, Cagle observed.

"They were real sticklers about work permits, and only certain people could get in. I'm not sure it worked, because apparently the place where she is, is swarmed with media. So, I don't know how many they were able to keep out. But they are keeping them at bay."

Cagle followed that with another quip: "I do think they're so hounded by the media that she decided to give birth on Memorial Day weekend so people like me would have to come to work. She's sick of us!"

While Pitt's family issued a statement expressing excitement for Pitt and Jolie, her father said several months ago he'd like to meet his grandchildren but, says Cagle, "apparently, there's still a rift. I don't know if that's been repaired yet."

And when will Jolie be back on a movie set?

"She has signed on for a couple of projects, but is taking some time off, obviously, for this," Cagle responded.