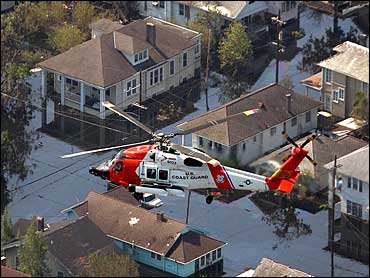 In a herculean task that could take months, engineers struggled to pump out the flooded city Tuesday, and the filthy waters were dropping noticeably. "I'm starting to see rays of light," the mayor said.

The pumping began after the Army Corps of Engineers used rocks and sandbags over the Labor Day weekend to finally plug the 200-foot gap that let water spill into New Orleans and swamp 80 percent of the bowl-shaped, below-sea-level city in the aftermath of Hurricane Katrina.

On Tuesday, the Corps said the area under water had fallen to about 60 percent.

"I'm starting to see water levels much lower than I've seen," Mayor Ray Nagin said after surveying his city from the air. "Even in areas where the water was as high as the rooftops, I started to see parts of the buildings."

Still, he warned of the horrors that are likely to be revealed when the waters recede. "It's going to be awful and it's going to wake the nation up again," the mayor predicted, a day after saying the death toll in the city could reach 10,000.

Walter Baumy, a Corps manager in charge of the engineering job, said it will take 24 to 80 days to drain the city.

Exactly how long the job will take depends on a number of factors. Among other things, the condition of the pumps — especially whether they were submerged and damaged — is not yet fully known, the Corps said. Also, the water is full of debris, and while there are screens on the pumps, it may be necessary to stop and clean them from time to time.

The Pentagon, meanwhile, began sending paratroopers from the Army's storied 82nd Airborne Division to New Orleans to use small boats, including inflatable Zodiac craft, to launch a new search-and-rescue effort in flooded sections of the city. Maj. Gen. William B. Caldwell IV, division commander, said about 5,000 paratroopers would be in place by Tuesday.

The floodwaters in New Orleans were being pumped back into Lake Pontchartrain as rescue crews from as far away as California trolled the evacuated city for stragglers while suburban officials expressed frustration.

"So I'm asking Congress, please investigate this now. Take whatever idiot they have at the top of whatever agency and give me a better idiot. Give me a caring idiot. Give me a sensitive idiot. Just don't give me the same idiot."

Facing the chorus of criticism over the federal response to Hurricane Katrina, President Bush said Tuesday he will oversee an investigation into what went wrong and why — in part to be sure that the country would withstand more storms or even a weapons of mass destruction attack.

"Bureaucracy is not going to stand in the way of getting the job done for the people," Mr. Bush said after a meeting at the White House with his Cabinet on the storm efforts.

"I said thousands. Some computer models say 10,000," New Orleans Mayor Ray Nagin said on The Early Show. "I don't know what the number is. But it's going to be big. And it's going to shock the nation."

Nagin said it could take about three months before New Orleans is back in business.

CBS News' 48 Hours will have a special report on Hurricane Katrina tonight
at 8 p.m. EDT.
The U.S. Army Corps of Engineers began pumping water out the flooded city Monday after closing a major gap in the levee that burst during Hurricane Katrina, flooding 80 percent of the bowl-shaped city.

Efforts to evacuate holdouts were stepping up Monday, with boat rescue crews from around the country searching for people to rescue.

"In some cases, it's real easy. They're sitting on the porch with their bags packed," said Joe Youdell of the Kentucky Air National Guard. "But some don't want to leave and we can't force them."

"Long as they keep bringing food and water, we can hold out 'til this water goes down," Kenny White told CBS News.

The city's police chief is begging them to come in and get out.

"There is absolutely nothing here. We advise people that this city has been destroyed. It has completely been destroyed," said Chief Warren Riley.

In the New Orleans suburbs, reports CBS News Correspondent John Roberts, cleanup crews are clearing tree clogged streets. The power companies are putting the lines back up. The handful of gas stations open for business have lines that last for hours. And in some places, people are beginning to trickle back home.

States throughout the country were welcoming evacuees from the disaster and sending police and firefighters to help. Some colleges also were offering Gulf Coast students free tuition for the fall semester.

"If you can get a Canadian team here in four days, U.S. teams should be here faster than that," Stone said. Pointing to two large oil refineries, "When they're paying $5 to $6 a gallon for gas, they're going to realize what this place means to America."

The frustrations also were being felt along the Mississippi coast, where people who have chosen to stay or are stuck in demolished neighborhoods scavenge for basics each day.

"I have been all over the world. I've been in a lot of Third World countries where people were better off than the people here are right now," retired Air Force Capt. William Bissell said Monday. "We've got 28 miles of coastline here that's absolutely destroyed, and the federal government, they're not here."

The scope of the misery inflicted by Katrina was evident as President Bush visited Baton Rouge and Poplarville, Miss., his second inspection tour by ground.

"Mississippi is a part of the future of this country and part of that future is to help you get back up on your feet," Mr. Bush told 200 local officials.

While in Louisiana, the president tried to repair tattered relations with the state's Democrat governor, Kathleen Blanco, while also praising relief workers. Blanco played down any tension.

"We'd like to stop the voices out there trying to create a divide. There is no divide," she said. "Every leader in this nation wants to see this problem solved."

"What happened here should never, ever happen again in this country. And I think we ought to do some analysis, and not just play the blame game," Nagin said. "Too many people suffered both during the storm, but way too many suffered after. And they suffered and they died. And it didn't have to happen."

"This type of catastrophic event requires quick action, and the bureaucracy did not allow that to happen," Nagin added.

Health and Human Services Secretary Mike Leavitt declared a public health emergency for Texas, saying it would speed up federal assistance to help almost 240,000 storm evacuees — the most of any state.

Federal officials on Monday dubbed Arkansas' Little Rock Air Force Base the hub for all disaster-related overseas air shipments. The base is one of the few in the mid-South equipped to handle large cargo planes and is a seven-hour drive to New Orleans.