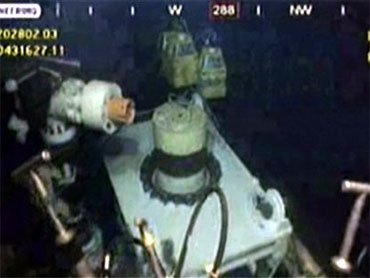 A tightly fitted cap was successfully keeping oil from gushing into the Gulf of Mexico for the first time in three months, BP said Thursday.

The victory - long awaited by weary residents along the coast - is the most significant milestone yet in BP's effort to control one of the worst environmental disasters in U.S. history.

Now comes the anxious wait, CBS News Correspondent Mark Strassmann reports from Houma, La. The oil has no place to go, and BP engineers have to monitor the well's building pressure with reviews every six hours for up to two days.

One worry: unforseen snags, like the one Wednesday night that stopped this test, Strassmann reports. Undersea robotics had to replace a faulty choke line. It was leaking oil.

Even if test results show the well is strong, BP might release some oil anyway to avoid pushing its luck and over-stressing the well, Strassmann reports.

Even if the well holds out for the whole two days, the vents will be opened again and oil released while engineers conduct a seismic survey of the ocean floor to make sure oil and gas aren't breaking out of the well into the bedrock, said retired Coast Guard Adm. Thad Allen, the Obama administration's point man on the disaster.

"For the people living on the Gulf, I'm certainly not going to guess their emotions," BP vice president Kent Wells said. "I hope they're encouraged there's no oil going into the Gulf of Mexico. But we have to be careful. Depending on what the test shows us, we may need to open this well back up."

"That's great. I think a lot of prayers were answered today," said Riley.

Billy Nungesser, president of Plaquemines Parish and an outspoken critic of the federal and corporate response to the spill, warned against complacency.

"We better not let our guard down. We better not pull back the troops because, as we know, there's a lot of oil out there, on the surface, beneath it. And I truly believe that we're going to see oil coming ashore for the next couple of years," he said.

The stoppage came 85 days, 16 hours and 25 minutes after the first report April 20 of an explosion on the BP-leased Deepwater Horizon oil rig that killed 11 workers and triggered the spill.

"Finally!" said Renee Brown, a 35-year-old middle school guidance counselor visiting Pensacola Beach, Fla., from London, Ky."Honestly, I'm surprised that they haven't been able to do something sooner, though."

Video images, which for months had featured a billowing brown cloud violently fouling the Gulf, showed a remarkably different picture: A quiet, still well. Shortly after it coughed its last bit of oil and the last opening was squeezed shut, it quieted, with only tiny bubbles floating past the stack.

Commercial fishermen at Delta Marina in oil-stained Plaquemines Parish were subdued in their response. Some said there was still a long clean up ahead and others flatly refused to believe the leak was contained.

"I don't believe that. That's a lie. It's a (expletive) lie," said Stephon LaFrance, a 49-year-old oysterman whose been out of work for weeks. "I don't believe they stopped that leak. BP's trying to make their self look good."

Wells said at a news briefing that oil stopped flowing into the water at 2:25 p.m. CDT after engineers gradually dialed down the amount of crude escaping through the last of three valves in the 75-ton cap.

After speaking about the passage of a financial reform bill Thursday afternoon, President Obama called the development a "positive sign," but said that testing was ongoing and that he would speak further about it Friday.

The cap is designed to stop oil from flowing into the sea, either by bottling it up inside the well, or capturing it and piping it to ships on the surface. Allen said if the cap holds, it will probably be used to pipe oil to the surface, with the option of employing it to shut the well completely if a hurricane threatens.

Doug Suttles, the company's chief operating officer, told reporters on Dauphin Island, Ala., that stopping the flow of oil is a "great sight" but not cause for celebration. The effort to permanently stop the flow of oil is "far from the finish line," Suttles said.

Allen said that after the 48-hour test, all the valves will be reopened and BP and federal officials will decide whether to close off the well again or keep it open, with the oil that pours out again being collected by vessels floating on the surface of the Gulf.

Though not a permanent fix, the solution has been the only one that has worked to stem the flow of oil since April. BP is drilling two relief wells so it can pump mud and cement into the leaking well in hopes of plugging it for good by mid-August.

The cap was lowered onto the well on Monday and was on track to be closed up Wednesday before a leak set back the effort. The leak on the side of the capping stack was fixed by replacing the assembly, called a "choke line" overnight.

Drill work was stopped on one relief well because it was not clear what effect the testing of the cap could have on it. Work on the other relief well had already been stopped according to plan.

BP has struggled to contain the spill and had so far been successful only in reducing the flow, not stopping it. The company removed an old, leaky cap and installed the new one Monday.

Meanwhile, with the disaster nearly three months old, the man in charge of the $20 billion fund set up by BP to pay individuals and business for their losses said it will start making payments in early August.

Ken Feinberg, who was in charge of the compensation paid to families of victims in the Sept. 11 terrorists attacks, told a meeting of government officials in Louisiana that he expected a seamless transition from BP management of claims to his administration.

Between 93.5 million and 184.3 million have already spilled into the Gulf, according to federal estimates.

For some, it was hard to believe the flow had really stopped.

"Completely?" asked Michelle Blanchard, the wife of a shrimper in Chauvin, La., when she heard about the oil stopping from an AP reporter. "Come on," she said in disbelief.

"It's a good thing it stopped. I'm excited," she said.

Steve Shepard, Gulf Coast chair of the Mississippi Chapter of the Sierra Club, said he's still skeptical about the news.

"I think it's a little premature to say it's definitely over. They've gotten our hopes up so many times before that in my mind I don't think it's going to be over until Christmas."

Nine-year-old Lena Durden threw up her hands in jubilation when her mother told her the oil was stopped.

"God, that's wonderful," said Yvonne Durden, a Mobile-area native who now lives in Seattle and brought her daughter to the coast for a visit. "When came here so she could swim in the water and see it in case it's not here next time."

"Everyone has waited on edge for this day to come," said Roberts, whose district includes the devastated tourist town of Grand Isle. "There is a lot of oil remaining. Our focus will be to clean up the impacted areas and make the many impacted industries whole as quickly as possible."

Allen said at a briefing it's not clear yet whether the cap, which was mounted on the well Monday, will ultimately be used to shut in the oil or to channel it through pipes to collection ships overhead.

Randall Luthi, president of the Washington, D.C.-based National Ocean Industries Association, a national trade group representing the offshore petroleum industry, said it gives everyone a chance to focus on how to clean up the spill.

"This is by far the best news we've heard in 86 days. You can bet that industry officials and their families are taking a big sigh here. We hope this is a reliable fix to the immediate flow of oil until the relief wells are completed."