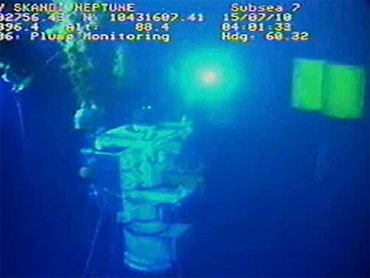 BP engineers were back to the slow work of trying to choke the Gulf of Mexico oil gusher with an untested cap after replacing a leaky pipe Thursday, the latest delay in the uncertain fix.

Kent Wells, a BP PLC vice president, said at a news briefing in Houston that the overnight leak in a pipe on the side of the towering, 75-ton capping stack was fixed by replacing the assembly, called a "choke line."

The work sent the oil giant back to restarting preparations for testing whether the cap can stop the oil without blowing a new leak in the well. If it works, the cap will be a temporary fix until BP can drill into the gusher to plug it for good from underground, where the seal will hold better.

"Bear with us," Wells said.

The leak was discovered after two of the three valves on the cap that can open or shut the device had been closed, bringing BP and government scientists, who are also watching, tantalizingly close to starting a 48-hour test of how the well and cap withstand the pressure.

Wells had warned that the process of getting ready and then choking the oil a mile below the sea, at a depth only submarine robots can reach, consisted of many precise, individual steps.

"Any one of these steps can take longer than anticipated," Wells said Wednesday, before the leak disrupted work.

Retired Coast Guard Adm. Thad Allen, the Obama administration's point man on the disaster, said at a briefing it's not clear yet whether the cap, which was mounted on the well Monday, will ultimately be used to shut in the oil or to channel it through pipes to collection ships overhead.

"I have a high degree of confidence we can substantially decrease the oil coming into the environment," Allen said.

Meanwhile, with the disaster nearly three months old, the man in charge of the $20 billion fund set up by BP to pay individuals and business for their losses said it will start making payments in early August.

Ken Feinberg, who was in charge of the compensation paid to families of victims in the Sept. 11 terrorists attacks, told a meeting of government officials in Louisiana that he expected a seamless transition from BP management of claims to his administration.

The new well cap remains a temporary fix, he said, until one of two relief wells BP is drilling can reach the gusher underground and plug it permanently with heavy drilling mud and cement.

"Make no mistake, the number one goal is to kill the well ... to stop it at the source," he said.

BP expects to keep the oil trapped in the cap for 48 hours before it decides if the approach is working.

The cap - a 75-ton metal stack of lines and valves - was lowered onto the well on Monday in hopes of either bottling up the oil inside the well machinery, or capturing it and funneling it to the surface.

After an intense day of review and debate ordered by government scientists, the initial round of tests was green-lighted Wednesday afternoon, CBS Evening News anchor Katie Couric. But tests were halted by the leak.

"What we didn't want to do is compound that problem by making an irreversible mistake," Allen said.

The new round of tests will involve closing off all three openings in the cap to the Gulf, in theory stopping the oil leaking into the Gulf. BP will be monitoring pressure under the cap. High pressure is good, because it shows there's only a single leak. Low pressure, below 6,000 pounds per square inch or so, could mean more leaks farther down in the well.

With the leaking pipe replaced, BP had to start from a few steps back to resume preparations for the test.

Preparations included letting more oil pour out of the cap temporarily and turning off a pipe that had been sending some of the oil to a collection ship, so that the full force of all the erupting crude would go into the cap. Engineers also had to recheck equipment and move undersea robots that perform the work back into position.

Wells was hesitant to give a firm timeframe for when the test could start, but expected it to be Thursday.

"We're going to keep moving forward with this," Wells said.

Allen said a committee of scientists and engineers will monitor the results and assess every six hours, and end the test after 48 hours to evaluate the findings.

If the cap works, it will enable BP to stop the oil from gushing into the sea, either by holding all the oil inside the well machinery like a stopper or, if the pressure is too great, channeling some through lines to as many as four collection ships.

Drill work was stopped on one relief well because it was not clear what effect the testing of the cap could have on it. Work on the other relief well had already been stopped according to plan.

The government estimates 1.5 million to 2.5 million gallons are leaking every day.

As of Thursday, the 86th day of the disaster, between 93.5 million and 184.3 million gallons of oil had spewed into the Gulf since the Deepwater Horizon rig leased by BP exploded April 20, killing 11 workers.