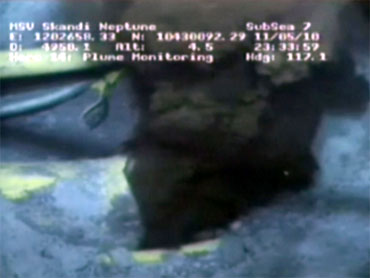 Hours after hearing a demand from a congressional chairman, BP announced the oil company would provide a live broadcast of the oil spill from a government website.

"This may be BP's footage, but it's America's ocean," Massachusetts Democrat Rep. Edward Markey, the chairman who made the demand, said in a statement. "Now anyone will be able to see the real-time effects the BP spill is having on our ocean."

The chairman of a congressional subcommittee called on BP to release live video feeds of the oil gushing from a blown-out well in the Gulf of Mexico.

Earlier Wednesday, Markey demanded the broadcast so independent scientists could more accurately calculate the flow rate. He questioned why such data wasn't readily being made public.

Markey didn't stop with BP, reports CBS News Correspondent Sharyl Attkisson. He blasted the Coast Guard for what he described as letting BP call the shots.

Coast Guard officials were on a boat with BP contractors who stopped CBS News cameras from viewing an oily beach, and the Coast Guard - which is in charge of the investigation - admits it's had access to live video since Day One but wouldn't let Congress or the public see it, Attkisson reports.

Markey said there was "no excuse for withholding live video for 23 days."

Markey's demand came after BP released some video footage of the leak after other pressure from Congress. BP uses several remotely controlled submersibles to record video of the leak site 24 hours a day, according to a statement the subcommittee released.

"Congress and the American public have the right to know what is happening in real time, so that they can understand and react to the situation as it develops," Markey said in a statement.

Frank Muller-Karger, a University of South Florida professor of biological oceanography, told committee members an on-land system such as satellites are needed for measuring weather to know what is going on below the ocean surface.

Government agencies have set up a task force to focus on how much oil is spilling, but BP America President Lamar McKay said under questioning at the hearing that officials still don't know which estimates are correct.

"It's theoretically possible," that the larger estimates are accurate, he said. "But I don't think anyone who's been working on this thinks it's that high."