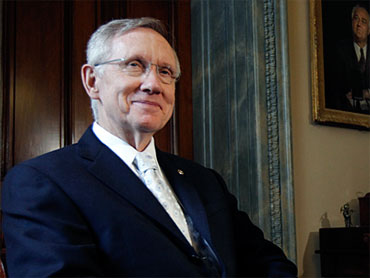 "By [current] law oil companies are liable for $75 million in damages. This is clearly insufficient," Reid said on the Senate floor today. "Some believe it should be raised to $10 billion. Others support no cap at all. I certainly think a $10 billion cap is inadequate. Whatever the final figure the catastrophe is a wake-up call."

In his remarks, Reid also referenced a CBS "60 Minutes" report which aired on Sunday.

"Last night's edition of '60 Minutes' proved the damning evidence of the British Petroleum's efforts to pad their wallets," he said. "The program was direct and to the point. It led to 11 horrific and unnecessary deaths. Harmed enormous tourist business and disrupted life for many along the Gulf coast. As the pollution grows worse, those consequences will only compound."

In the wake of the Gulf of Mexico oil spill, many Democrats have urged quick action on increasing liability limits. Democratic Senators Robert Menendez, Frank Lautenberg of New Jersey and Bill Nelson of Florida introduced legislation in the beginning of May raising the cap on oil company liability for spill damages from $75 million to $10 billion.

Democrats' attempts to bring the legislation to the floor last week were blocked by Republican Senator Lisa Murkowski of Alaska. Democrats are expected to try again this week to bring the measure up for consideration.

In a letter today to federal agencies helping with the cleanup of the oil spill, Menendez asked to be provided a dollar figure for the costs incurred once the spill is contained.

"After all is said and done, not one dime of federal taxpayer money should be spent on this spill response," Menendez wrote. "For that reason, once the relief well has permanently halted the flow of toxic oil in to the Gulf, I am requesting a full accounting of all federal expenses incurred responding to this tragedy, so the public can be sure that BP reimburses the government for every penny spent cleaning up BP's mess."

Oil Leak Siphon Working, but is it too Late?

John Nolen is a CBS News Capitol Hill Producer. You can read more of his posts in Hotsheet here.