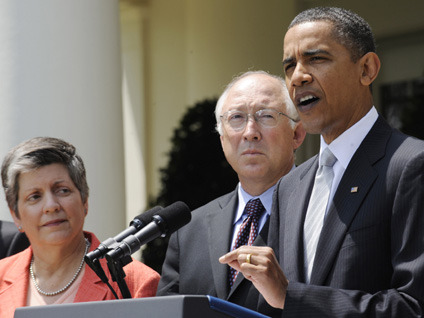 The president seemed genuinely angry today, on a beautiful spring afternoon in the Rose Garden. Having watched him on a daily basis for about a year and a half, I'm confident he wasn't faking it.

He seems deeply upset about the growing calamity in the Gulf, about the environmental damage, about the irresponsibility of the companies involved, and about their efforts to shift the blame.

"I did not appreciate what I considered to be a ridiculous spectacle during the congressional hearings into this matter," he intoned. "You had executives of BP and Transocean and Halliburton falling over each other to point the finger of blame at somebody else."

President Obama may have decried finger-pointing today, but he also did a fair amount of it himself. Not only at the three companies, but at previous administrations.

Here's what he said today when he turned the finger at the federal government:
Watch CBS News Videos Online
"For too long, for a decade or more, there has been a cozy relationship between the oil companies and the federal agency that permits them to drill. It seems as if permits were too often issued based on little more than assurances of safety from the oil companies. That cannot and will not happen anymore." (watch the video at left)

"A decade or more" clearly encompasses the Bush Administration, and may include the Clinton years too. But Mr. Obama's been president for nearly 16 months. Does he get at least a little piece of the blame?

Not a bit, he made clear. He portrayed his administration as valiantly fighting the good fight against the oil companies from day one:

"Now, from the day he took office as Interior Secretary, Ken Salazar has recognized these problems and he's worked to solve them. Often times he has been slammed by the industry, suggesting that somehow these necessary reforms would impede economic growth. Well, as I just told Ken, we are going to keep on going to do what needs to be done."

So while the president is pointing the finger of blame, he's also working hard to make sure that over time the finger doesn't do a 180.

The defensive tone was clear right from the top of his remarks today when he said: "The potential devastation to the Gulf Coast, its economy, and its people require us to CONTINUE our RELENTLESS efforts to stop the leak and contain the damage." (Emphasis added.)

And who can blame him. The potential political downside to a disaster is huge. Just ask George Bush. The White House, and most who have closely compared the responses, say this spill has little similarity to Katrina.

As Robert Gibbs told me today, "Katrina happened because no one was there to help, it was a non-response."

With the Gulf spill, he said, the response was "comprehensive and fast" and the Coast Guard and Interior Department were on the scene almost immediately.

This disaster is going to play out over a very long time, and as it gets worse there certainly will be efforts by others -- out of frustration over lost livelihoods and environmental damage, and for purely political purposes -- who will try to shift blame to the administration.

And eventually some of it may stick. The president is already working hard to make sure that doesn't happen.