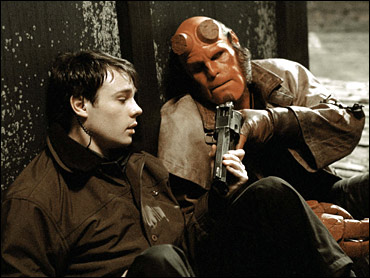 A wisecracking demon from hell took down The Rock for the weekend's box-office title.

"Hellboy," starring Ron Perlman as the comic-book superhero with red skin, horns and a tail, debuted as the top flick with $23.5 million, according to studio estimates Sunday.

The Rock's "Walking Tall," a remake of the 1973 vigilante-justice tale, opened in second place with $15.3 million.

The weekend's other new wide releases followed: Disney's animated cow tale "Home on the Range" at No. 4 with $14 million and Julia Stiles' love story "The Prince and Me" at No. 5 with $10 million.

"This weekend was like the classic movie-goers' weekend. You had all these different genres represented," said Paul Dergarabedian, president of box-office tracker Exhibitor Relations.

"If you wanted lots of choices, they certainly were there for you."

Mel Gibson's "The Passion of the Christ, which continued to hold strongly. "The Passion" came in sixth with $9.9 million, raising its total to $330.1 million. Distributor Newmarket Films expanded "The Passion" to 3,408 theaters, up about 200, in anticipation of a solid run through Easter next Sunday.

A cult attraction compared to better-known comic books such as "Spider-Man" and "X-Men," "Hellboy" managed to draw a broad audience with its mix of dark humor and nonstop action.

Perlman plays a demon raised by a loving adopted father (John Hurt), who grooms the hero to work for a government paranormal bureau disguised as a waste-management operation.

The movie presents a working-class hero fighting for good despite his demonic pedigree and wistful longing for the affection of a beautiful colleague (Selma Blair).

"He's a plumber. He rides around in a garbage truck. How's he supposed to get the girl?" said Tom Sherak, a partner in Revolution Studios, which produced the movie for distributor Sony.