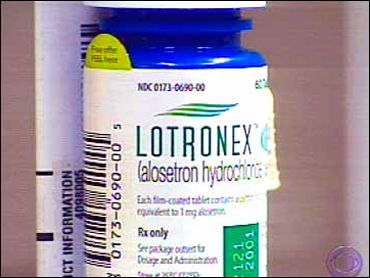 The government is allowing a once-popular drug for irritable bowel syndrome back on the market, but with new restrictions aimed at mitigating side effects blamed for killing seven people.

Lotronex, made by North Carolina-based GlaxoSmithKline, may be prescribed only by certain doctors enrolled in a special program, the Food and Drug Administration said Friday. The drug also should be given only to the sickest patients, fewer than 5 percent of sufferers, who have failed other therapies.

But the FDA stopped short of even tougher restrictions recommended by its scientific advisers, including requiring doctors to have undergone special training on Lotronex's risks before prescribing it and registering all patients in a national database to monitor how they fare.

Instead, doctors can enroll in maker GlaxoSmithKline's prescription program merely by saying they're qualified and agreeing to educate their patients about the drug and report any side effects.

It's unprecedented for a drug pulled off the market for safety reasons to return, although other risky drugs have been saved from bans by implementing restricted marketing programs. Indeed, the FDA never wanted Lotronex to quit selling--it urged the maker two years ago to restrict sales instead, but Glaxo decided to quit selling rather than take that step.

Since then, the FDA and Glaxo were heavily lobbied by desperate patients who pleaded that Lotronex was the only drug that ever relieved their constant misery, and the FDA says Glaxo returned to negotiate.

"One of the important goals we have at FDA is to try to balance access to drugs with the potential risks of those medications," said FDA gastrointestinal drug chief Dr. Victor Raczkowki. "We feel that through this program we are effectively meeting both goals."

Irritable bowel syndrome afflicts millions of Americans, mostly women. It's not life-threatening but can cause continual abdominal pain, sudden and urgent need to go to the bathroom, and either frequent diarrhea, constipation or both.

When the FDA first approved Lotronex in February 2000, it was lauded as the first new therapy in decades, and some 150,000 patients began taking it.

But just nine months later, Glaxo pulled Lotronex off the market because of severe side effects that the FDA says hospitalized 163 people, caused 51 to undergo major surgery and killed at least seven.

The problems: an intestinal inflammation called ischemic colitis and severe constipation, both so severe they could kill.

Consumer advocates had opposed returning Lotronex to the market, arguing that studies showed it offered only modest overall relief, and then just for women with the diarrhea-predominant form of the disorder. It is not proved to work for men, and is dangerous for anyone with constipation.