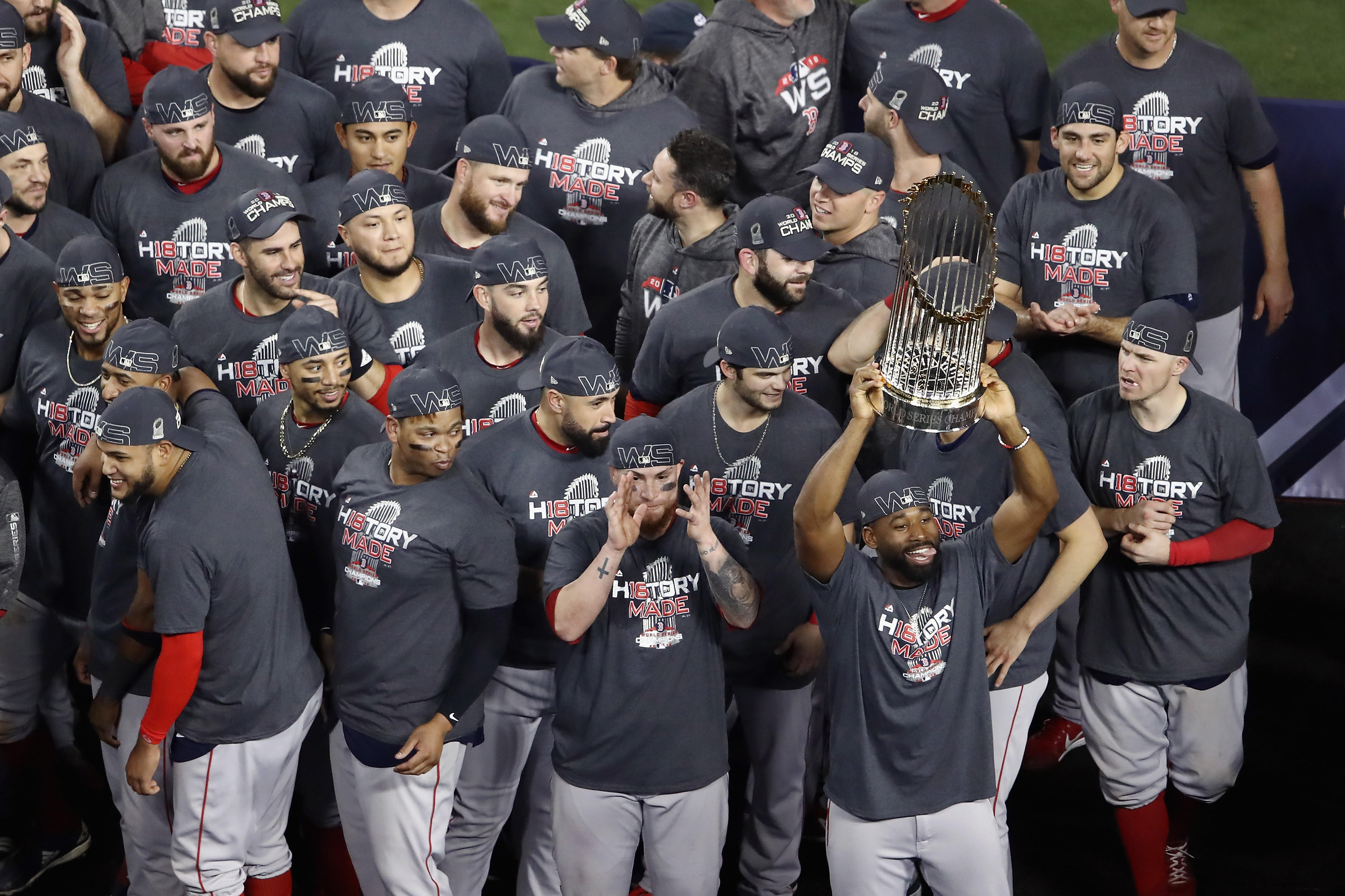 LOS ANGELES — The Boston Red Sox really are that great. A team to remember from top to bottom. A season to savor from start to finish.

A tormented franchise during decades of frustration and despair before ending an 86-year championship drought in 2004, the Red Sox have become baseball's team of the century with four titles in 15 seasons.

"It's very special. Seeing all these grown men over there, just acting like kids, that's what it's all about," Price said.

Alex Cora's team romped to a 17-2 start and a club-record 108 wins, then went 11-3 in the postseason, dispatching the 100-win New York Yankees and the 103-victory and defending champion Houston Astros in the playoffs. Cora became the first manager from Puerto Rico to win a title and just the fifth rookie manager to do it overall.

CBSSports.com's R. J. Anderson calls it "one of the most impressive team seasons in recent memory."

CBSSports.com's Dayn Perry says the win "cemented them as one of the greatest teams in MLB history. Those 119 wins combine their 108 regular-season wins and their 11 October wins en route to the championship. Here's a full listing of the teams to win more games in a combined regular season and playoffs ...

"Yes, that's it," Perry continued. "Only the storied and vaunted '98 Yanks formed a handshake queue or victory scrum more often than the 2018 Red Sox have. Yes, the Red Sox are "merely" tied for ninth when it comes to most regular season wins, but just four teams — the aforementioned '98 Yankees, the 1909 Pirates, the 1927 Yankees, and 1961 Yankees -- won more games in the regular season than this year's Boston model did while also winning the World Series. So often, the best team in the regular season doesn't wind up hoisting the trophy -- baseball is by turns uplifting and frustrating that way -- and that's in part why the Sox are in such rarefied air."

"We are a bunch of grinders," Pearce said, "and this is exactly where we knew we were going to be."

Pearce, a June acquisition from Toronto, had three homers and seven RBIs in the final two games of the Series.

After losing to Houston in Game 7 last year by the same 5-1 score, the Dodgers became the first team ousted on its home field in consecutive World Series since the New York Giants by the New York Yankees at the Polo Grounds in 1936 and '37.

Los Angeles is still looking for its first championship since 1988.

"I can't say enough about what Clayton - what our guys did," manager Dave Roberts said. "Unfortunately, we came up short again this year."

Boston won its ninth title, tying the Athletics for third-most behind the Yankees (27) and Cardinals (11). All that stood between the Red Sox and a sweep was an 18-inning loss in Game 3, the longest World Series game ever. They trailed 4-0 in the seventh inning of Game 4 when ace Chris Sale rose from the dugout bench for a fiery, profane, motivational rant, and his teammates woke up in time to rally for a 9-6 win. Boston never trailed in Game 5.

"I didn't say anything that that anyone didn't know," Sale said. "Just rallying the troops and letting them know - we're the best team on the planet, and to start playing like it."

The 33-year-old Price, a Cy Young Award winner in 2012, long pitched under an October shadow cast by his regular-season success. He had been 0-9 in 11 postseason starts before defeating Astros ace Justin Verlander in the clinching Game 5 of the American League Championship Series. He won his third straight start Sunday and became the first pitcher to beat Cy Young Award winners in the finale of a League Championship Series and the World Series in the same year.

After allowing two runs over six innings to win Game 2 last Wednesday, Price got two outs in the ninth inning of Friday's marathon game. He became the first to pitch into the eighth inning of a Series game on one day of rest since the Yankees' Bob Turley in 1957.

Price gave up a home run to David Freese on his first pitch, then allowed just two more hits - the last a triple to Freese that Martinez lost in the third-inning twilight and allowed to drop behind him in right. Price struck out five and walked two, retiring 14 in a row before a leadoff walk to Chris Taylor in the eighth ended his night after 89 pitches. He tapped his heart several times to Red Sox fans behind the first base dugout while walking to the bench.

Joe Kelly struck out three straight pinch hitters and Sale, originally scheduled to start Game 5, fanned three more in the ninth. Sale ended by throwing a slider past Manny Machado, a meager 4 for 22 (.182) in the Series, and raised both arms as catcher Christian Vazquez ran out to jump on him with glee and teammates from the dugout and bullpens followed.

While Price rewrote his own legacy, Kershaw was unable to change his. He dropped to 1-4 with a 6.06 ERA in postseason elimination games. Plagued at times by an aching back, the 30-year-old lefty no longer is the dominant pitcher who won three Cy Young Awards, his famous 12-to-6 breaking ball now more 10-to-4:30.

"It just hurts worse when you make it all the way and get second place," Kershaw said.

He began aggressively, throwing strikes on his first six pitches, and the Red Sox were ready.

Andrew Benintendi hit a one-out single and Pearce pulled a fastball over the middle of the plate and sent it 405 feet into the left-field pavilion.

While the crowd of 54,367 for Dodger Stadium's final game this year was stunned, Freese woke up fans in the bottom half. He drove Price's first pitch 402 feet to the opposite field and into the right field pavilion.

Betts homered on a slider that stayed in the strike zone after going 0 for 13 in Los Angeles this weekend, the first postseason home run of his career coming in his 87th at-bat. Martinez homered in the seventh, driving a fastball to straightway center.