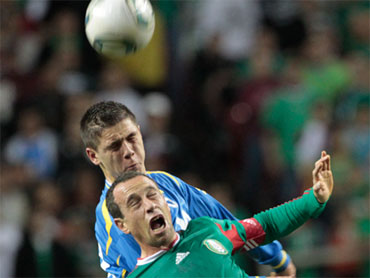 ATLANTA - Javier Hernandez and Edgar Pacheco scored second-half goals to give Mexico a 2-0 win over Bosnia-Herzegovina in an international friendly Wednesday and give new coach Jose Manuel de la Torre a winning debut.

De la Torre was selected to replace Javier Aguirre after Mexico was eliminated from last year's World Cup by Argentina in the second round. De la Torre had coached Toluca, one of Mexico's most successful clubs, in recent years.

Hernandez, who has become a key player for Manchester United this season, is among five players to be retained after the World Cup loss.

There was a World Cup feel, or at least sound, to the friendly. The attendance at the Georgia Dome was 50,507, including many who blew vuvuzelas.

Mexico seized control in the opening minutes of the second half.

Bosnia goalkeeper Kenan Hasagic blocked a penalty kick by Hernandez in the 49th minute, but Hasagic was too deep in the net to stop the follow-up shot by Hernandez. Hasagic was perhaps a foot behind the line when he caught the second effort from Hernandez that gave Mexico the lead.

Mexico goalkeeper Jesus Corona helped set up his team's second goal in the 55th. Corona's long goal kick past midfield took a bounce over Bosnia's defenders. Hasagic moved up in an attempt to take possession but instead Pacheco won the race to the ball and scored.

Corona frequently had to wade through streams of tissue paper thrown onto the field by fans behind the goal in the first half. The box in front of the net was almost completely white from the streams hurled from the stands after Bosnia's Vedad Ibisevic put the ball in the net in the 17th minute only to have it called offside.

Corona blocked another shot by Hoffenheim in the 31st minute.