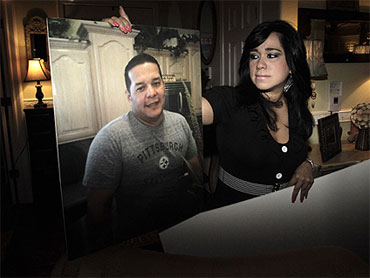 After a bad day on the job as a Border Patrol agent, Eddie DeLaCruz went home and began discussing with his wife how to celebrate her upcoming birthday. Then he casually pressed his government-issued handgun under his chin and pulled the trigger.

"It was the ugliest sound I ever heard in my life," his widow, Toni DeLaCruz, recalled of that day last November. "He just collapsed."

A month later, one of DeLaCruz's colleagues at the Fort Hancock border post put a bullet through his head, too.

Suicides including these have set off alarm bells throughout the agency responsible for policing the nation's borders. After nearly four years without a single suicide in their ranks, border agents are killing themselves in greater numbers. Records obtained by The Associated Press show that at least 15 agents have taken their own lives since February 2008 - the largest spike in suicides the agency has seen in at least 20 years.

It's unclear exactly why the men ended their lives. Few of them left notes. And the Border Patrol seems somewhat at odds with itself over the issue.

Federal officials insist the deaths have nothing to do with the agency, which has doubled in size since 2004, or the increasingly volatile U.S.-Mexico border. But administrators have quietly undertaken urgent suicide-prevention initiatives, including special training for supervisors, videos about warning signs and educational programs for 22,000 agents nationwide.

"It's a microcosm of life," said Christine Gaugler, head of human resources for Customs and Border Protection, the agency that oversees the Border Patrol. "There's no uptick. It has nothing to do with our hiring. We are just responding to the suicides that have occurred."

The agency declined to provide details of the suicides and would only confirm the number of deaths since 2008. But the AP uncovered the names, locations and dates of the suicides by reviewing public records, including those obtained from medical examiners through the Freedom of Information Act, and speaking with people close to the Border Patrol.

Sources close to the Border Patrol also provided the training video and information about what federal officials have done to address the suicides.

The 17-minute video made earlier this year is part tribute to the dead and part cautionary tale. It implores agents battling depression or stress to ask for help - a candid suggestion for an agency that once forbid agents from appearing in uniform at the funerals of colleagues who killed themselves.

The video was made by the agency's El Paso sector following at least four suicides among its agents, and it has been embraced by other sectors. In the video, El Paso agent Edmundo Puga Jr. describes getting a call about a suicide.

All but two of the recent deaths involved agents stationed in Texas, California or Arizona.

In interviews with the AP, Border Patrol officials and families of the dead agents pointed to both professional and personal reasons.

The job, which starts at about $37,000 a year, has changed dramatically since the hiring surge began. Two years ago, an agent at a busy border station might have processed 150 illegal crossers a day.

But stepped-up border security - including 600 miles of fence and an even larger "virtual" fence that is monitored online - have reduced the number of illegal crossings, as has the economic hardship of the recession.

The result is a job that went from thrilling to downright boring. Agents often spent 12-hour shifts sitting alone in Jeeps and pickups keeping watch for illegal immigrants.

"Now an agent may start his shift and sit in one position for eight hours and monitor traffic and do their work," said psychologist Kenneth Middleton, clinical director of the Border Patrol's peer-support program. "Now they've got a whole lot of time to think about other things going on in their life."

Despite the boredom, the potential for danger is constant, especially in places where the border has been wracked by a bloody drug war in Mexico.

Agents face hostility from many of the people they encounter in the desert. In June, a Border Patrol agent in El Paso shot and killed a 15-year-old Mexican boy in the dry bed of the Rio Grande. Authorities said the teen and others were throwing rocks at the agent from the Mexican side while he was trying to arrest illegal immigrants. The incident resulted in a tense standoff between armed federal agents from both Mexico and the U.S.

The story rang familiar to Mark Monsivais, whose daughter, Julia, committed suicide in July 2009. He said people hurled chunks of concrete at the 24-year-old agent during her three years in Yuma, Ariz.

Other times, he said, his daughter complained of lagging backup patrolling a dangerous and barren stretch known as "Devil's Corridor." She worried about running into drug traffickers but more often stumbled on dehydrated migrants collapsed in the sand, their legs twitching.

"It's transparent to us, the people that are here, that the job is a definite factor. They're under an enormous amount of stress," Monsivais said.

"If they do something wrong," he added, "it's an international incident."

The job was so dangerous the family has doubts about whether it was suicide. Relatives wonder whether Julia could have been killed by shady characters she met on patrol.

Suicide rates are generally higher among law enforcement than the general population, but the Border Patrol's recent troubles put the agency even above those numbers.

Some families said working for the Border Patrol had no bearing on their loved one's suicide. The parents of 29-year-old Charles Glenn Becker, who killed himself in May 2009 in Comstock, Texas, said he was up for promotion.

But Juan Tellez, the guard who committed suicide a month after DeLaCruz last fall, didn't think a promotion was in his future. His girlfriend, Christina Vasquez, said Tellez constantly butted heads with his supervisor over schedules and assignments. Tellez desperately wanted a transfer and turned to Fort Hancock's union steward for help - agent Eddie DeLaCruz.

DeLaCruz's suicide put her boyfriend over the edge. A month later, he stumbled home drunk, grabbed the gun from his holster and blew a hole as large as a coffee mug through his head.

Vasquez, four months' pregnant with their first child, was in the room.

"He loved being in Border Patrol," she said. "But toward the end when he was in that shift, he would call me for two hours and just go on and ramble."

Vasquez and DeLaCruz's widow agreed that the rush to double the agency's ranks caused it to overlook morale.

"The agency does run these agents to the fullest," Vasquez said. "'Protect, protect' as if they're robots and they're not. They're human beings."