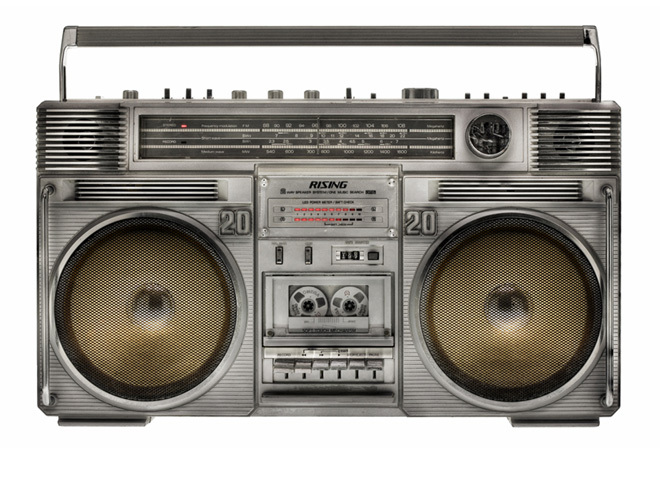 If you were listening to music in the '80s, says Serena Altschul, you might have been hearing it out of a boombox, a very loud boombox - maybe too loud!

Boomboxes were first introduced in the late 1970s, so instead of listening at home, you could take the beat to the street.

"It meant that you were like a walking jukebox, if you will," says artist and hip hop pioneer Fab5Freddy. "I grew up in the Bed Stuy section of Brooklyn, so it was a cool, typical, fun thing. Everybody would gather around it to hear that cool music."

Fab5Freddy remembers the sounds of the city, and the importance of bass to the boombox:

"Well, the bass was important to the boom," he explained. "I mean, that's where the boom comes from. Because, you know, the popular music as we came from disco into, you know, funk, of course, disco and then hip hop, that bass was important, and getting a good, clean, boom boom bass meant a lot."

In the early '80s, hip hop was still in its infancy. It wasn't on MTV, and you could hardly hear it on the radio.

But through the boombox you could listen to the songs often dealing with urban decay and racial injustice - songs like "The Message" by Grandmaster Flash and the Furious Five:

"The bill collectors they ring my phone,
And scare my wife when I'm not home,
Got a bum education,
double-digit inflation,
I can't take the train to the job,
there's a strike at the station"

"Those stories weren't being written, and they certainly weren't being published in poetry or mainstream publications," said photographer Lyle Owerko. "So what better way than to communicate a message through sound, which has been done, you know, through the history of music?

Owerko has his own collection of boomboxes. Their images and stories are documented in his new book, "The Boombox Project."

"You hear stories of back in the day, like on the beach, or people sitting on the subway, going to the beach, and they're all listening to their own boomboxes, and they all tune them in together, and get that same song going," Owerko said, "so that it's like a whole democracy of sound."

Of course, not everyone wanted to join this sonic community ...

The boombox had its detractors, a sentiment popularized in the 1986 film "Star Trek IV: The Voyage Home," when Spock used the Vulcan grip to paralyze a boombox-wielding punk.

But it was too late - the boombox was everywhere.

And it wasn't just an inner-city thing, says Owerko: "The boombox is borderless.

"You know, it extended around the globe, you know, and it was wherever people wanted to listen to music - whether it was a beach cafe, in a mechanic's shop, in an artist's studio."

Today the boombox is regarded as a symbol of rebellious spirit and remains a pop culture icon.

And though it's still seen, it's no longer heard.

Looks like the big bad boombox got drowned out . . . by the little bitty Walkman.

The boombox was on the wrong side of history, getting bigger as people were plugging into smaller and smaller devices - so small that nowadays, they fit in the palm of your hand.

"So this ability to be in your own little bubble and hear music, you know, still get great sonics but just right into your ear as opposed to everybody else's, it was good for some people and bad for others," said Fab5Freddy.

And though it might be gone, it's always important to once in a while hit pause.

•  "The Boombox Project: The Machines, the Music, and the Urban Underground" by Lyle Owerko (Abrams)
•  fab5freddy.com
•  houseofoldies.com
•  Clic Gallery and Book Store

Nathaniel Rateliff: Music on the edge

This week on "Sunday Morning" (December 4)
Thanks for reading CBS NEWS.
Create your free account or log in
for more features.
View CBS News In
CBS News App Open
Chrome Safari Continue
Be the first to know
Get browser notifications for breaking news, live events, and exclusive reporting.