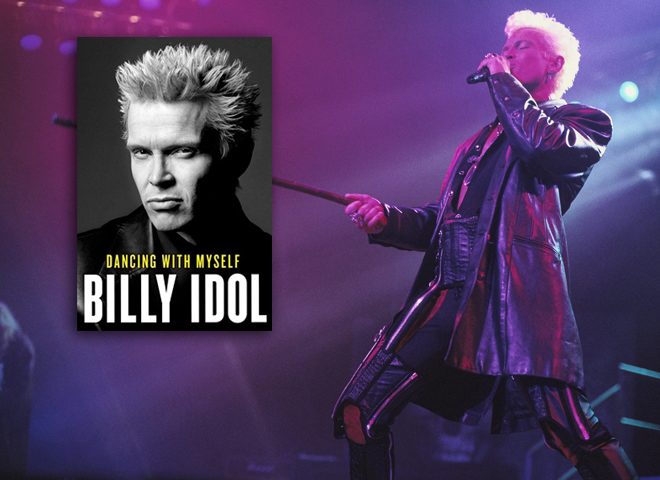 In this chapter from Billy Idol's new autobiography, the rocker writes about '70s audience reactions to performances by rising punk stars such as Johnny Rotten and Siouxsie Sioux.

From "Dancing With Myself" by Billy Idol. Copyright © 2014 by Billy Idol. Published by Touchstone, a Division of Simon & Schuster, Inc. Reprinted with permission.

In A Revolution, One Year Equals Five

Louise's, a lesbian club in a basement just off Oxford Street, London

"You'll never find, as long as you live, someone who loves you, tender like I do," the bass voice intoned. Slickly, the DJ moved the ladies around the downstairs dance floor at Louise's, a basement club off Oxford Street frequented mostly by lesbians.

One had to enter through a narrow side street, which opened into a small reception room with a few scattered tables and chairs. Toward the back was a stairway that led downstairs to the bar and dance floor. The clientele was mostly butch women and fashionable lipstick lesbians.

For the Sex Pistols and our small Bromley Contingent of early punks, it was a much-needed haven. Back then, the way we dressed would have started a riot if we had set foot in any normal club or pub. The DJ often played Lou Rawls's "You'll Never Find Another Love Like Mine," and it would always pack the dance floor. It was an anthem for those ladies, and I would casually watch their slow dances and hot, intimate touches from my spot on the edge of the dance floor.

I delivered tools for my dad in the daytime and went to rehearsals and gigs and hung out at Louise's every night. I would get home at 4 a.m., wake up at eight, and start all over again. This accelerated lifestyle would eventually take its toll, but I had a purpose that drove me to succeed. Referring to overthrowing the czar in Russia, Lenin said, "There are decades where nothing happens; and there are weeks where decades happen." Revolution was on our minds, too.

We nursed ourselves on the lesbians' rebellious milk, growing strong and attracting like-minded souls. We all congregated there, drinking and socializing, plotting our rebellion. It was our midnight meeting place, our sanctuary. We all walked the same path at that time. Many of the classic-rock bands talked about musicianship but had little to offer us, the disenfranchised and disenchanted. We were youth thrown on the scrap heap.

There was at least one veteran band that spoke to us. The Who insisted, "We're all wasted," while the likes of Lou Reed, David Bowie, and Iggy Pop seemed in touch, but what about our own scene?

Those nights at Louise's gave us hope and made me feel that something special was indeed afoot. I first heard Steve Jones utter the now iconic phrase "Never mind the bollocks!" there as he sat with Rotten, Paul Cook, and Malcolm. The lost generation was back from the dead! As the gay ladies danced and loved one another, we devised our plans and consolidated a movement. By being like-minded, we ruled the night. We would rock London to its core. The lesbian bar was our spiritual "upper room," and we, the new aristocracy of the poor, knighted with fire, sallied forth and followed Johnny Rotten into the unknown!

For now, the "unknown" turned out to be Paris, where the Sex Pistols were to play their first-ever gig outside England, at the opening of the Club de Châlet du Lac, Paris, September 3, 1976. I drove my dad's Ford delivery van and we boarded the ferry at Dover that would take us across the Channel to Calais. Crowded into the van were Steve Bailey, Siouxsie, Si Barker, and Michael, one of a set of twins who hung out with us and who first used the expression "Never mind the bollocks" before Jones, with his don't-give-a-s*** attitude, brought it to life for a whole generation.

We met up with the Pistols at Sartre's old hangout, Les Deux Magots, on the Place Saint-Germain-des-Prés, and occupied an outdoor table on the busy sidewalk. John was wearing a black beret and a red kids' jumper slit up the side. Parisians have always had a sense of pride when it comes to fashion, so it was great fun seeing the befuddled looks of surprise on their faces when confronted with a group of oddly dressed punks. This wasn't just a challenge to their sense of style and taste that could be chalked up to the generation gap; it was an assault on their ideas and attitudes.

That attack continued into the night at the gig, when Siouxsie wore her "Night Porter" outfit, complete with a swastika armband and SS cap. She'd taken the look from Liliana Cavani's controversial 1974 film of the same name, in which Charlotte Rampling played a concentration camp survivor who falls in love with her Nazi guard/torturer, played by Dirk Bogarde. Siouxsie's hair was cropped short, as Rampling's was in the film, and her makeup was extreme. She would become both famous and infamous for the getup. We were all used to strange looks, but the crowd's response to Siouxsie's outfit at the Club de Châlet du Lac that night was particularly unpleasant.

The French audience had no way of knowing in those early days that clothing as a performance art statement was part of the punk culture and couture. We all co-opted images and logos that, when mixed together, would force an observer to react and feel the rejection of all things human that we felt. We tried to challenge preconceived notions. Some of Vivienne Westwood's designs mixed communist and fascist imagery to assault the onlooker. Just as we felt marginalized, we wanted to lash back and hurt so that we could, as the Doors' Jim Morrison put it, "break on through to the other side."

All we wanted to do was shock, because that was all we felt was left to us. During those early days, within our little universe, an understanding of other people's interpretations of our actions was beyond us. On this night, though, the taunting crowd was becoming downright hostile.

The Pistols came onstage, with Rotten sporting a Westwood designed black parachute bondage outfit with straps from elbow to elbow, leg to leg. We felt repressed in every way, so the prism of sexual bondage spoke to our belief that most people simply embrace and accept the chains and whips of society.

"The problem is you -- whatcha gonna do?" John taunted the crowd in "Problems." The French audience watched the show impassively while scowling at us. "We hate long hair and we don't wear flares." Rotten twisted, turned, and grimaced as he leaned on the microphone stand. The black outfit of restraint seemed to electrify his look and galvanize his attitude. A true star, John dominated the room with his presence and wild stare, punctuating his lyrics by burning a hole in the audience with his eyes. He might ignore them one moment, then launch into a tirade the next, practically frothing at the mouth, following it up with a look of disgust at the lack of response from the overwhelmed crowd.

Meanwhile, the Sex Pistols were coming together as a band. Steve Jones was getting noticeably better, and Cookie was adding beat, becoming tighter timewise. Glen Matlock held his end down well, adding tasteful runs that Sid Vicious, his eventual replacement, could and would never accomplish.

"We're vacant and we don't caaaaaare," caterwauled John. We had been led into a nowhere world where black was white and white was black, where no one fit if you challenged the norm. Proof of that was this Paris audience, getting increasingly incensed at us. Obviously, "The Night Porter" wasn't very big in France.

As the band thundered to the end of the set, things started to get even uglier. We tried to ignore the rowdy crowd, but Siouxsie was glaring and giving back as good as she got. Soon, a whole section of fans started throwing stuff at us. When it looked like they were about to attack us, we managed to run across the stage and find refuge with the band in their tiny dressing room. We later found out it was the anniversary of the day France declared war on Germany in 1939. Siouxsie sure had balls; she refused to remove the offending armband, and continued to wear it the rest of the evening at the after-party.

The City of Lights held a wild promise. To walk through the "rue Morgue" and drink in the Gallic nightlife was stimulating, but the gig I had just seen stayed with me, lodged in my brain. I don't remember too much after it except waking up in the driver's seat of my van looking onto the River Seine, a peaceful Saturday morning, the calm before the proverbial storm.