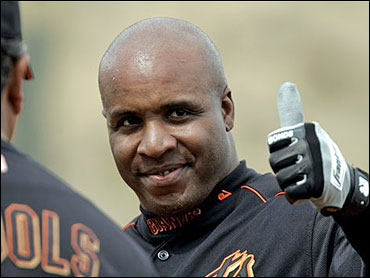 Barry Bonds plans to sue the authors and publisher of a book that alleges the San Francisco Giants' slugger used steroids and other performance-enhancing drugs.

Bonds' attorneys sent a letter Thursday to an agent for the authors of "Game of Shadows," and Sports Illustrated, which published excerpts this month.

The letter, signed by Alison Berry Wilkinson, an associate of Bonds' lead attorney, Michael Rains, was posted on the Chronicle's Web Site. A hearing was tentatively scheduled for Friday in San Francisco Superior Court.

"The reason we filed the lawsuit in the simplest terms possible is to prevent the authors from promoting themselves and profiting from illegal conduct," Rains told The Associated Press.

He said laws prohibit people from possessing grand jury materials unless they are unsealed and said authors Mark Fainaru-Wada and Lance Williams, both also reporters for the Chronicle, "have made a complete farce of the criminal justice system."

"We certainly stand by our reporters and the reporting they did for us," Chronicle executive vice president and editor Phil Bronstein said. "Nothing that's happened will change that."

Bonds' legal team will ask a judge Friday to issue a temporary restraining order forfeiting all profits from publication and distribution, according to the letter. The lawyers plan to file the suit under California's unfair competition law.

The attorneys will ask a federal judge to initiate contempt proceedings for the use of "illegally obtained" grand jury transcripts the authors used in writing the book. Rains said profits should be forfeited because of that.

Rains said Bonds will not comment directly on the lawsuit but strongly supports the case.

"Barry is doing fine," Rains said. "He's had a great spring as everyone knows. His bat speaks for himself and he's not going to speak on this action and this book."

Team USA advances after win over Iran
Thanks for reading CBS NEWS.
Create your free account or log in
for more features.
View CBS News In
CBS News App Open
Chrome Safari Continue
Be the first to know
Get browser notifications for breaking news, live events, and exclusive reporting.