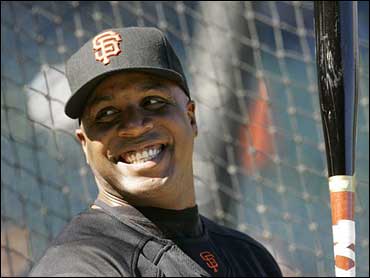 Barry Bonds wanted a pitcher to challenge him. Dontrelle Willis was more than ready.

Hopping off the mound, pumping his fist and throwing fastball after fastball, Willis kept history on hold Saturday night.

Bonds went hitless a night after connecting for his 754th home run, leaving the San Francisco star one shy of tying Hank Aaron's record in the Giants' 4-3 win over the Florida Marlins on Saturday night.

With his mom in the stands, Willis overmatched the slugger he admired growing up in the Bay Area. In the end, Bonds could only stand at home plate — right in the way of the catcher, actually — and watch a popup on his final swing.

Bonds was 0-for-3 with a walk, popping out twice and striking out against Willis, who has lost seven straight decisions, the longest skid of his big league career. Willis grew up just across San Francisco Bay in Alameda and often watched Bonds at Candlestick Park as a kid.

Bonds, on deck when Ray Durham got the winning single in the ninth, gets another chance against Florida on Sunday, when the Marlins start Sergio Mitre. After a day off Monday, Bonds' pursuit moves on to Los Angeles — where he'll be in front of hostile fans at Dodger Stadium.

They were anything but hostile at AT&T Park.

Fans jumped to their feet each time Bonds made his way to the batter's box, then began their routine chants of "Barry! Barry!" Bonds connected for his 754th homer in the first inning a night earlier, then drew four walks the rest of the night.

Bob DuPuy, MLB's president and chief operating officer, took in the game Saturday in Bud Selig's place while the commissioner was in Cooperstown, N.Y., for Sunday's Hall of Fame induction ceremony.

Giants manager Bruce Bochy said before the game that his players are excited for Bonds.

"You can see it. You can feel it down here in the dugout — excitement, electricity," Bochy said. "You look up and all the focus is on Barry's at-bat. No question all the guys down here feel it. It's history."

Bonds struck out in the first, popped to second in the third, walked in the sixth and then popped out to the catcher in the seventh.

Willis is 0-7 in 11 starts since beating the Cubs on May 29 at Wrigley Field. He kept up his success against left-handed sluggers — he hasn't allowed a homer to a lefty since Ryan Howard connected on July 29 last year.

With Florida ahead 3-2 in the seventh, Bonds came up with two on and two outs, and a chance to put San Francisco ahead.

Willis calmly wiped his brow, spit and stepped onto the rubber. With runners on first and second in a one-run game, Bonds popped up the first pitch and nearly interfered with catcher Matt Treanor making the play.

Willis, standing within feet of Bonds and approaching the plate, emphatically pumped his fist. He high-fived teammates on the way back to the dugout.

In 11 plate appearances against Willis, Bonds has singled once, struck out twice and walked five times.

When Bonds homered on Friday, he heard a taped greeting from Michael Jordan. On Saturday, it was hockey night in San Francisco. Bonds turned and watched from left field just before first pitch as the video board played another celebrity greeting.

"Hey Barry, Wayne Gretzky here. On behalf of my wife and kids we want to congratulate you on a job well done, but remember don't stop there and we'll be rooting for you as you chase down history."