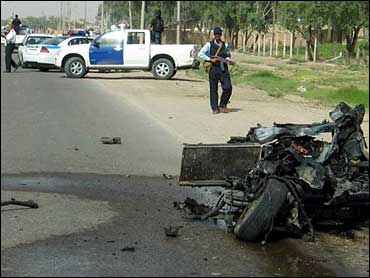 Continuing violence during the past days has also claimed the lives of three children, a U.S. soldier and a Sunni Muslim cleric, underscoring the rampant, random nature of an insurgency that has killed almost 800 people since the April 28 announcement of Iraq's new Shiite-led government, according to an Associated Press count.

At least 12 people were killed in a massive explosion targeting a restaurant in Tuz Khormato, 55 miles south of the northern city of Kirkuk, the Iraqi Defense Ministry said in a statement. Police Lt. Sabah Hidayat said at least 40 people were wounded.

"I was sitting inside my restaurant when about six cars parked nearby and their passengers came inside and ordered food," said restaurant owner Ahmed al-Dawoudi. "Seconds later, I heard a big explosion and the restaurant was turned into twisted wreckage and rubble. Blood and pieces of flesh were everywhere."

Shaways was not at the restaurant at the time of the blast, which killed 12 diners, including one of his guards. At least 40 were wounded. Kurds, who want oil-rich Kirkuk to be part of their autonomous Kurdistan region, have been regularly targeted by insurgent attacks.

The blast set ablaze eight cars in the restaurant's parking lot, the focal point of a bloody, rubble-strewn scene that U.S. and Iraqi police quickly cordoned off. Shards of glass, shoes and splattered breakfast meals covered the restaurant's floor as emergency workers raced around overturned tables and wooden chairs in a bid to treat the casualties.

The explosion targeted a convoy of Toyota Land Cruisers carrying civilian contractors, damaging one of the vehicles but injuring none of its occupants, the U.S. military said.

A U.S. soldier assigned to the Marines was killed when a roadside bomb struck the vehicle he was traveling in Wednesday near the volatile western Iraqi city of Ramadi, the military announced Thursday.

Another American soldier, attached to Task Force Liberty, died of non-battle-related wounds Wednesday in the northern city of Kirkuk, the military said. The incident is under investigation.

As of Thursday, at least 1,665 U.S. military members have died since the Iraq war began in March 2003, according to an Associated Press count.

In a bid to curb Iraq's insurgency, Shiite leaders have started reaching out to Sunni Muslim insurgent groups believed responsible for multiple attacks.

Senior Shiite cleric Hummam Hammoudi, chairman of a committee named by the National Assembly to draw up Iraq's constitution, said the Shiite-led government has opened indirect communications with factions in the Sunni Arab-dominated insurgency and is trying to persuade them to lay down their arms.

"Some informal and limited contacts have been established with parties that we label as 'resistance,' so they can contribute to the drafting of the constitution," said Hammoudi, a senior member of Iraq's largest Shiite political party.

Experts have long maintained it will be difficult to defeat the insurgency with military means alone. They stress the need for Sunni Arab participation in the political system, adequate reconstruction funds and job creation as key to weakening support for the rebels.

But the contacts did not include radical Islamic groups such as terrorist chief Abu Musab al-Zarqawi's al Qaeda in Iraq, which has been blamed for some of the worst bombings, kidnappings and other attacks.