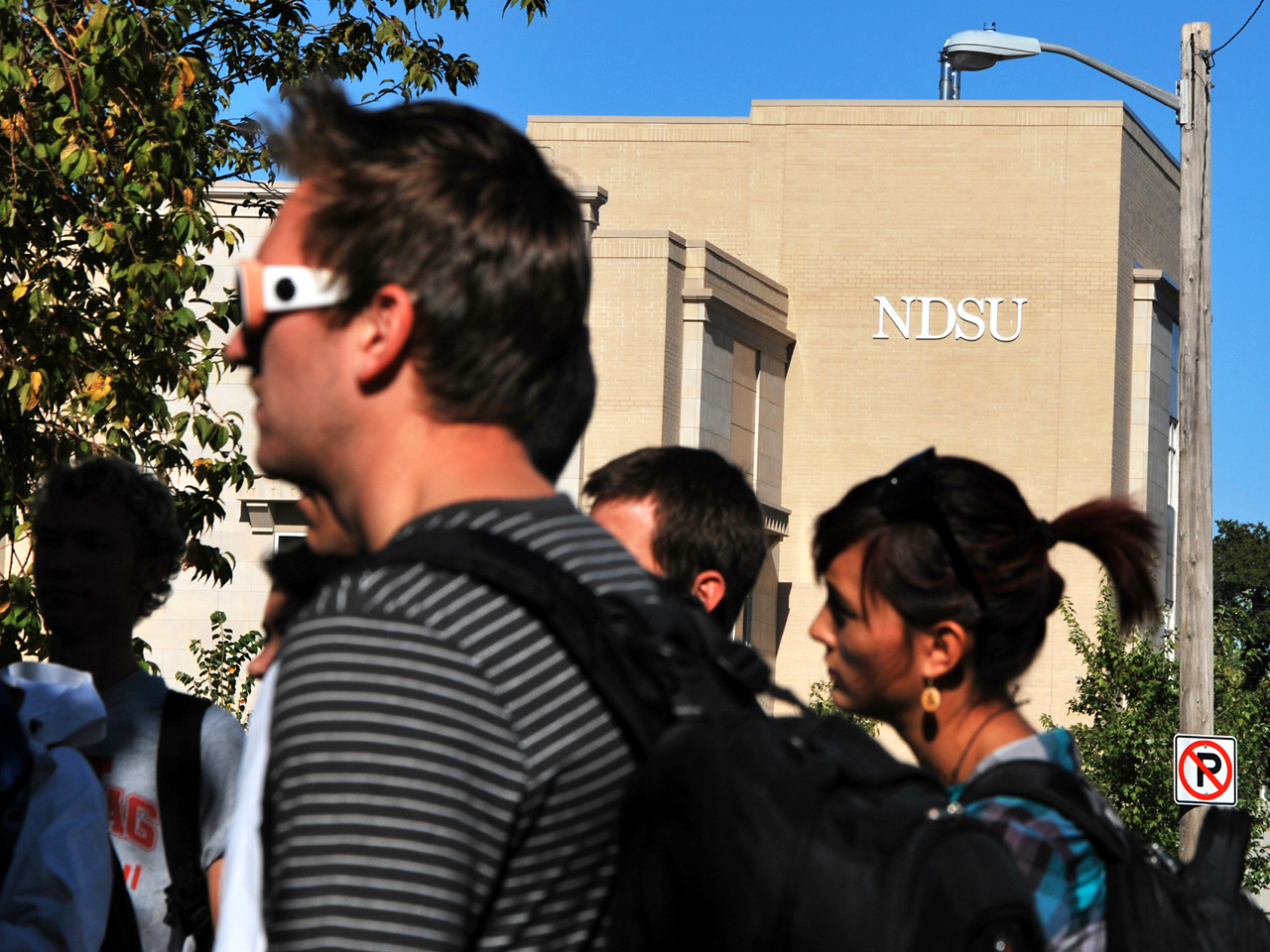 The campuses of the University of Texas at Austin and North Dakota State University in Fargo had been deemed safe by early afternoon, and authorities were working to determine whether those threats were related. A third evacuation order for much-smaller Hiram College in northeast Ohio was issued hours later and remained in effect Friday evening.

Hiram spokesman Tom Ford said the school had received an emailed bomb threat that it was taking seriously. Crews with bomb-sniffing dogs were checking all buildings on the campus about 35 miles southeast of Cleveland where about 1,300 students are enrolled, he said.

The threats on the much-larger campuses in Texas and North Dakota ended as false alarms after tens of thousands of people followed urgently worded evacuation orders, one of which some worried didn't come fast enough.

Both of those campuses emptied at quick but orderly paces Friday morning, though students acknowledged an air of confusion about what was going on. The threats coming as violent protests outside U.S. embassies in the Middle East also stirred nervous tension among some students, and Texas officials acknowledged global events were taken into account.

The first threat came around 8:35 a.m. to the University of Texas from a man claiming to belong to al Qaeda, officials said. The caller claimed bombs placed throughout campus would go off in 90 minutes, but administrators waited more than an hour before blaring sirens on the campus of 50,000 students and telling them to immediately "get as far away as possible" in emergency text messages.

Authorities said they started searching buildings for explosives before the alert was issued. UT President Bill Powers defended the decision not to evacuate sooner.

"It's easy to make a phone call ... the first thing we needed to do was evaluate," Powers said. "If the threat had been for something to go off in five minutes, then you don't have the time to evaluate, you just have to pull the switch."

"What took so long?" student Ricardo Nunez said. "It should have been more immediate."

North Dakota State University President Dean Bresciani said about 20,000 people left the Fargo school's campuses as part of an evacuation "that largely took place in a matter of minutes." FBI spokesman Kyle Loven said NDSU received a call about 9:45 a.m. that included a "threat of an explosive device."

Police and school officials said the evacuation was as organized as could be expected, with one campus employee describing people as "being North Dakota nice" while driving away.

"Nobody was panicked and nobody was trying to speed or run over anybody," said Juleen Berg, who works at the NDSU heating plant. "Everybody was waiting their turn."

Graduate student Lee Kiedrowski of Dickinson, N.D., said he was walking on the NDSU campus when he got a text message telling him to evacuate within 15 minutes.

"The panic button wasn't triggered quite immediately," Kiedrowski said. "But there was definitely the thought that we live in a different world now, and with everything that's going on with the riots at the U.S. embassies in the Middle East, your brain just starts moving. You never really know what's going on."

"Certainly the global situation would be part of what we look at when we evaluate any threat," Powers said.

Sirens wailed on the Austin campus and cellphones pinged with text messages when the initial alert when out. Students described more confusion than panic as they exited the sprawling campus, where police blocked off all roads heading in as lines of cars sat in gridlock trying to get out.

The evacuation also created logistical concerns for the 14th-ranked Texas Longhorns football team. Inside a police station across from the football stadium, executive senior associate athletics director Ed Goble asked about getting the athletics complex building cleared because the team had to leave for a Saturday game at the University of Mississippi. The team's locker room is inside the building.

Goble later said he wasn't asking that the team be made a priority. Shortly after 11 a.m., while the rest of campus remained almost deserted, Goble said police had given players permission to go into the athletic complex to pack for the game.

"All building managers are notified at the same time and all are expected to move as rapidly as possible," said Gary Susswein, spokesman for the UT president's office, noting there was no priorities list for what buildings were to be cleared first.

With rain falling, students stood under awnings and overhangs and inundated nearby off-campus restaurants and coffee shops as they waited for updates.

Abby Johnston, a production and special editions coordinator for Texas Student Media, said she received the first text message from the university while thinking about what she would publish in the next day's paper. Then the sirens blared.

"We do the siren test once a month and so at first people thought maybe it was just a test, and then we started to tell everybody, `No actually we have to get out of here pretty immediately,"' said Johnston, 22. "There was definitely a little bit of nervous tension."

Tania Lara, a graduate student at the Lyndon B. Johnson School of Public Affairs, said she was at work inside a central campus academic building when she got a text message to get as far away was possible.

"It was calm but nobody knew what was going on," she said, describing a crush of students heading for the exits. "No one was yelling `get out of here' or anything like that."

Also Friday, Valparaiso University in Indiana increased security and posted a warning to students on its website after a vague threat was discovered scrawled in graffiti. The school said the threat claimed "dangerous and criminal activity" would occur during the university's daily chapel break.

The FBI and local authorities searched the campus but found nothing suspicious and university spokeswoman Nicole Niemi said classes and other regular activities would go on.