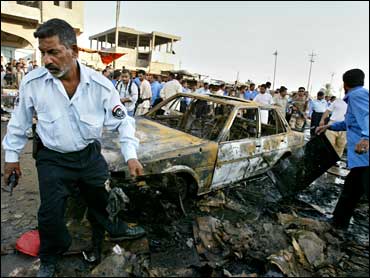 A suicide car bomber killed at least 28 people and wounded 62 on Saturday in the main market of oil-rich Basra, Iraq's second largest city.

The explosion occurred in the late afternoon when a large number of people were in the square, Captain Mushtaq Kadhim of the Basra police said.

The suicide attacker blew himself in the late afternoon when many people were shopping. The blast left pools of blood around the square drenched in blood set several vehicles on fire.

It wasn't known who staged the attack, but Basra has seen growing violence and unrest recently, leading Prime Minister Nouri al-Maliki last week to declare a month-long state of emergency in the mainly Shiite city.

The attack came one day after Jordanian-born terrorist mastermind called on Iraq's Sunni Arabs to kill Shiites. His al-Qaida in Iraq has claimed responsibility for some of the most horrific attacks in Iraq, including bombings that have killed more than 100 people.