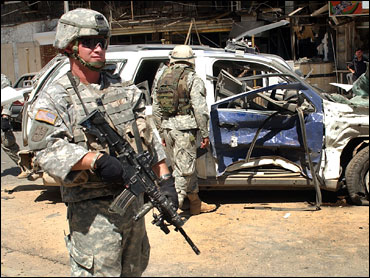 Iraq's new prime minister declared a state of emergency Wednesday in the southern city of Basra, vowing to crack down with an "iron fist" on rival gangs battling each other for power.

Violence has been escalating in Shiite-dominated Basra, with a wave of kidnappings and the slayings of nearly 140 people mostly Sunnis but also Shiites and police in May alone, police said. The tension has been brewing largely due to the growing influence of anti-American cleric Muqtada al-Sadr and his Mahdi Army, and the armed Badr organization, both Shiite groups.

Prime Minister Nouri al-Maliki, himself a Shiite, declared the monthlong state of emergency during a visit to the oil-rich region, said Syed Muhammad al-Haidari, a top Shiite official traveling with him. Al-Maliki gave a strong denunciation of the violence that Sunni religious leaders have blamed on Shiite death squads.

"We shall use an iron fist against the leaders of the gangs or those who threaten security," he said earlier in a speech, apparently referring to the militias as well as rival tribal groups. "And we shall ask all security departments to draw up an effective and quick plan to achieve security.

It is the only state of emergency in effect, Interior Ministry Undersecretary Major-General Ahmed Al-Khafaji said from Basra. Other cities, including Baghdad and Ramadi, have curfews.

Meanwhile, a parked car packed with explosives hit a police patrol in the northern Iraqi city of Mosul on Wednesday, killing at least five policemen and wounding 14, including a senior officer, as violence continued unabated after one of the bloodiest days in recent weeks.

In other recent developments in Iraq: